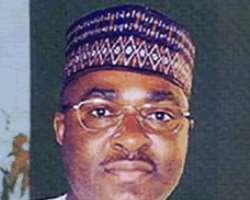 Opposition parties have accused Governor Isa Yuguda of Bauchi State of abandoning the state due to his frequent travels since his inauguration for a second term on May 29. PAUL ORUDE writes on this  and the governor's insistence that he can govern the state from anywhere.

Yuguda, who took the late President Umaru Yar Adua's daughter as fourth wife in 2009 was criticised for travelling a lot throughout his first tenure. Critics believed that the development had translated to less democratic dividends for the people of the state under his leadership.

Reacting to the accusations, Yuguda said it was not necessary that the citizens of the state must see his face before he works for the development of the state.

'With or without my face, I will do my job, which I am doing. The world is a global village and one does not need to be in a particular place to be effective. I can govern the state well from anywhere,' he said.

Yuguda under fire
But the opposition believes that Yuguda is dead wrong and must be close to the people, who elected him, to impact on their lives. A chieftain of the Action Congress of Nigeria (ACN), Yusuf Garba Alkaleri, said his absence posed a great threat to the development of the state. Alkaleri said: 'The governor has been away for some time because he has nothing to offer to the people of the state.

The reason is also because the administration lacks focus on how to bring about development as we witnessed during last four years of administration. The government failed to deliver dividends of democracy and they could not complete most of the projects they embarked upon despite the huge amount of money released to contractors.'

In the same vein, the caretaker chairman of the Congress for Progressive Change (CPC) in the state, Aliyu Sai'du, said the administration had been slow on execution of  projects because the governor was always on foreign trips. The spokesperson of the All Nigeria Peoples Party (ANPP), Sabo Mohammed, observed that since the inauguration of Yuguda for a second term,' he has turned his back on the state.'

Where is Yuguda?
At the Government House, there are  indications that the Chief Executive Officer of the state is absent. Socio-economic activities are at its lowest ebb as the personality a governor brings to the state with his presence is lacking.

Everywhere you turn to, the issue of the governor's frequent travels and whether he would be able to meet his campaign promises with his lifestyle is hotly debated among the citizens.

Yuguda travelled out of the state barely two weeks after his second term inauguration.

His swearing-in ceremony promises
Yuguda, who served as minister in President Olusegun Obasanjo's administration, promised  the people of Bauchi State that within his 100 days in office, he would complete all on-going projects started by his administration from 2007 to 2011. He also promised to start paying visits to every ward in June to know their problems with a view to solving them.

Yuguda said he would devote his second tenure to speeding up completion of projects started in his first term in office. But few hours later, the state was greeted by a twin bomb blasts which occurred at the army barracks in the capital. Members of the Boko Haram sect claimed responsibility for the bomb blasts which claimed 13 lives.

Yuguda condemned the bomb blasts  and took time off his schedule to visit and sympathise with the victims at the hospital.

Speculations became rife that names of persons nominated to serve as commissioners had been submitted to the state House of Assembly. On 15 June, Yuguda swore-in his Head of Civil Service, Abdon Dalla Gin, his Chief of Staff, Yusuf Musa Gumli, his Special Adviser on Assembly Matters, Jibrin Adamu and his Chief Press Secretary, Ishola Michael Adeyemi. Few days later, Yuguda flew out of the country.

Since there was, perhaps, no known reason given officially to the public by the governor before he travelled, concern started to grow after almost a month of his absence.  While the governor was away, the task of handling the state fell on his deputy, a green horn politician.

Rather than act, Sagri Aminu Saleh, son a former Secretary to the Federal Government, represented his boss during public functions.

Among such functions was the visit by the Presidential Panel on Post Election Violence to the state and the swearing-in of a new batch of corps members posted to the state. Many expected the governor to be at the latter occasion, following the furore generated over his response to the killing of some corps member during the general election in April. Many were disappointed that the governor was not around.

Brief appearance
Following strong criticisms over his gallivanting, Yuguda resurfaced after over a month of absence. He remained in Abuja where he and his erstwhile political rival, FCT minister, Senator Bala Mohammed, were involved in a much publicised reconciliation.

The governor stayed few days more in Abuja while negotiation was going on to address the face-off between governments and organised labour over N18, 000 minimum wage for government workers.

On Wednesday July 27, Yuguda made a brief appearance to Government House, Bauchi. The next day, he received the Director General of the Nigerian Civil Aviation Authority, Dr Harold Demuren, and his team. They discussed the proposed Bauchi International Airport project abandoned by successive governments since the 1980s. Few hours after seeing Dr Demuren and his team off, Yuguda hurriedly flew out of the state on Thursday July 28 yet again.

The question of where the governor had been all this while resurfaced.

His aides said he was away to attend the People's Democratic Party (PDP) NEC meeting in Abuja. While some said he was in Europe, London to be precise, others speculated that he was on lesser Hajj. Some even said he went for medical check up.

The Speaker of the Bauchi State House of Assembly, Alhaji Yahaya Mohammed Miya, defended the absence of Governor Yuguda from the state. Miya said: 'The leadership of the House is aware that the governor travelled out. He informed the leadership of the House before he left the state for medical check-up. He also told us that he is pursuing matters that are in the state's interest in Abuja. He travelled with our consent and we are expecting him back in the state very soon'.

Long absence
Spokesperson of the Peoples Democratic Party (PDP) in the state, Sani Al-Amin Mohammed, said the people criticising the governor over his frequent travels got it all wrong.

Al-Amin said:  'They should know that the governor is a member of the PDP and has the mandate of the party to bring on board those that will run the government with him successfully. The governor also has the right to go for his annual leave. The state was run by the governor and he was doing well, so what are they insinuating? They should wait and see how the plan goes.

Yuguda had admitted that his last four-year administration was full of mistakes saying that was because he was surrounded by sycophants who did not mean well for the state. To this end, he promised to make a great difference in the state within the first 100 days in office as governor of the state. With the criticism generated by his frequent travels the governor has a huge responsibility to prove his critics wrong.

But the adamant critics do not believe the governor is anywhere near doing that with what they described as his faulty start.

Mohammed of the ANPP said: 'His long stretch of absence from the state means he has not been able to do much in the first  57 days of his second tenure.'