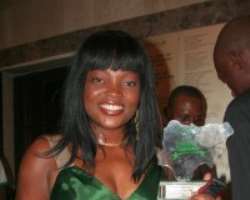 W hy did you pack out of Akoka side?
I just wanted a change of environment. I have one or two friends where I stay; I think the place is cool. So, you've left your parents.No, we all moved out together.

Obviously, things are looking up, the last time we met, you were using cars for small boys like us, now you are riding a Honda Jeep.

A point of correction, that car you saw is not a small car. It is worth more than one million naira. Well, it is just an improvement; I just wanted something bigger.

It seems you are the hottest actress in the Yoruba genre of the industry. What's the magic?

Like I've always said, it is all about hard work and prayer. Whatever you do just do it well because you never can tell which job might land you at the top. So, I give it to God and hard work.I know a couple of actresses who are working hard but not getting as much attention as you are?

Like I said earlier on, prayers also matter. Put anything you do before God and if it is His will, you will surely be celebrated there. The industry is large for any good actress to be noticed. I thank God I'm being appreciated.The pay must surely be good.Thank God, I'm not complaining.

People say you've been producing so many movies these days.

Tell me about the movie, Apadi.
It's a traditional movie, it's got some lesson in it and it is technically superb. It had a large cast and was shot in traditional setting of Abeokuta and Ilaro.

Who is financing your movie?
I financed Ojo Ketala myself, but my marketer, Olasco Film financed the others. He brings the fund and I produced.

You must be enjoying acting.
Yes, definitely. Acting is my first love, I didn't get into acting because I wanted money, I just wanted to exhibit my talent. Acting has always been my first love.

But you never had the intention of becoming a full blown actress when you started acting in 'I need to know'.

Yes, I just wanted to exhibit the talent in me. I wasn't after making money or becoming a celebrity.

What is still there in acting world that you want to achieve?

I still have a lot to learn and achieve. When I look at the likes of Bimbo Akintola, I shiver and tell myself that I am not there yet. That is a very deep actress, I give that to her. And there is Kate Henshaw, I saw her in Show Me Heaven. That was her best. I was thrilled. I keep telling myself that I still have a long way to go.

Is winning City People best actress not coming too early?

No, I don't think so because I've worked hard for it. Most of my friends and colleagues sent me texts saying I deserved it. Even people around me feel I deserved it. They gave it to me because they believed I deserved it.

What is next for you after best actress award?
I don't know, only God can tell. I'll just keep working harder.

Will you ever produce an English movie?
Why not? When the time comes, I will. It is just that I am sticking to the production of Yoruba movies because I understand the market.

What point were you trying to prove in Risikat?
I was called upon to act and I did my best. The character was a street girl and always fighting, that was why I had gloves on.