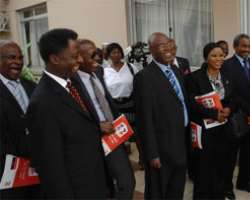 NIGERIAN ICT stakeholders had clamoured for the creation of an Information and Communications Technology (ICT) ministry, given the speed of development that convergence has brought into the world economy.

It became moreso, with radical transformation driven in no small measure by giant strides in the telecommunications sector. This was fired with the introduction of GSM in the country a decade ago.

These stakeholders, like incumbent President of the Association of Telecoms Companies of Nigeria, ATCON, Engr Titi Omo-Ettu, his predecessor, Dr Emmanuel Ekuwen, Chairman of the Licensed Telecom Operators of Nigeria, ALTON, Engr Gbenga Adebayo and the President of Institute of Software Practitioners of Nigeria, ISPON, Dr Chris Uwaje among a host of others, who envisaged the benefits of convergence in an emerging ICT economy like Nigeria, raised their voices to this call.

Other advocacy groups, in the ICT sector, like the Joint Action Committee for ICT Awareness and Development, JACITAD, also joined in the clamour.

Although industry observers commended the effort, they also requested to know the position of Technology in that new order.

However, last week, President Goodluck Jonathan attempted to address the issue by creating a new Communications Technology, CT ministry. Yet the stakeholders say this has brought more confusion.

They faulted the President on two grounds - insufficient consultation and zero awareness on new ministry's agenda, concluding that it was not time yet to clap for the government for creating a new ministry for the ICT industry.

The new ministry
However, Secretary to the Federal Government, SGF, Senator Anyim Pius Anyim, who announced the creation of the new ministry said that the ministry was created to drive the process of further developing communications technology in the country.

He was corroborating President Jonathan who had in a briefing organized to introduce the new ministers and other recent appointees, declared that 'We have taken steps to tinker a little with some ministries.

The Ministry of Commerce and Industry has been renamed the Ministry of Trade and Investment and a new Ministry of Communication Technology has been created. We took these actions in our nation's interest so that the vast opportunities existing in these sectors can be properly harnessed to grow our economy and create jobs for our people.'

Rumour mills
Rumours are that under the new ministry, the Nigerian Broadcasting Commission, NBC may be fused with the Nigerian Communications Commission, NCC under a convergence that would bring both telecoms and broadcast media under one roof.

Secrecy, confusion
When Hi-Tech spoke to relevant industry stakeholders on the issue at the weekend the general question was why did the government shroud the issue of the new ministry with secrecy and confusion? For instance the President of NIG, Engr Bayo Banjo said 'it is difficult to comment on the merits and demerits of this new ministry and its minister.

Also the Chairman of Nigerian Computer Society, Lagos Branch, Mr Ejide Oladunmoye told Hi-Tech that the federal government should not expect the stakeholders to clap, at the moment, over the creation of the ministry until the prospects and aspirations for the new ministry are seen to have been put in place.

Another stakeholder who pleaded anonymity asked: 'We yearned for a ministry that would take care of Information and Communications Technology which now drives economies worldwide.

But now with the new ministry, we neither know the position of government on the Information, Science and Tech ministries, nor that of agencies like NITDA, Nigerian Communications Satellite Limited NIGCOMSAT, National Space Research and Development Agency NASRDA, the Computer Professional Registration Council of Nigeria CPN or even the Nigerian Copyright Commission, which are relevant stakeholders to the kind of ministry we envisaged'

The common questions were who are the stakeholders that sat with Sambo, where and when? Others who accused the government of playing politics with the ICT ministry, queried why President Jonathan should constitute another committee that was not made public when there was a stakeholders' recommendation on convergence earlier submitted to President Obasanjo.

Another area of concern was the appointment of Mrs Omobola Johnson Olubusola as the minister of the new ministry.

For them, the woman's degrees and professionalism notwithstanding, there were a lot of professionals in the sector who have played major parts in the sector's transformation, that would have taken up this daunting task of nursing a new ministry.

In fact, if wishes were horses, the stakeholders would have been a bit comfortable if the Federal government suspended the new ministry until all the parts are pieced together.

They also wished that the President cancels the appointment of the minister until the real ministry is in place with a clear -cut agenda to truly converge the relevant agencies and stakeholders.

The common reason they adduced was that the position of Nigeria's technological advancement at the moment, does not require any trial and error.