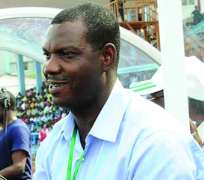 Nigeria Football Federation (NFF) may sack Dream Team V's handler, Austin Eguavoen, as part of its plans to overhaul the team after the team's elimination from September's All Africa Games.

In a statement yesterday by NFF's acting Secretary General (Technical), Emmanuel Ikpeme, the football house said it was disappointed that the technical crew led by Austin Eguavoen could not use the resources at its disposal to qualify Nigeria for the games.

'It's unfortunate the team had to lose out on the away-goal rule despite all the efforts of the federation. But we have to look ahead and be focused on what to do next', said Ikpeme on Sunday.

Maigari, on his part, expressed disappointment over the team's failure to fly despite the free hands given to the technical crew. In his words: 'This is very sad because we made all the efforts to ensure the team's qualification and gave the technical crew a free hand. Yes, we have to look ahead, but we must identify the challenges the team faces now in order to be able to march ahead positively'.

Apart from the bench, the soccer federation has equally resolved to beef up the team with fresh legs ahead of the Olympic qualifiers which Nigeria is bidding to host.

Nigeria failed on Sunday to pick the All Africa Games ticket after falling 2-0 to Ghana at the Baba Yara Stadium, Kumasi. The Dream Team went into the game with a 3-1 first leg advantage. In 2007, the Dream Team IV coached by Samson Siasia drew 0-0 with the Meteors in Sunyani and was then forced to a 1-1 draw in Abuja to bow out to the Ghanaians at the last hurdle. But Siasia and boys went on to win the Olympics silver in Beijing the following year.