How Joseph and I met, decided to get married and have a baby - Adaeze Igwe Yobo 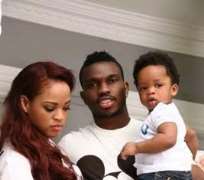 "We met at an event in Abuja and it might have been love at first sight, though I had not noticed it. I did not know that it was something that would go far. I never thought I'd be married when I did. I was not then into the boyfriend thing. I was still discovering myself. But in the course of our phone chats, it was as if we had known each other for a long time. He left Nigeria and came back and overstayed this time and we were together. About a month after that, he started talking about marriage. He said he was serious and that he really loved me. I was already in love with him, so I thought about it and realized I had nothing to lose.

I told if he was serious, he needed to come see my mum. Two weeks after the discussion, he came to see my mum.
Joseph and I both immediately agreed on having a baby. Because we thought about it that what would our baby together look like, and also maybe if I got pregnant, everyone would know that we were serious about getting married.

He left for the UK and I was always going to the hospital every other time to find out if I was pregnant. Eventually I called him to tell him the good news, and on hearing the news, he told me he was getting me the next flight to Liverpool. Then we started planning for the wedding...but agreed to do a small wedding because there was no time to plan a big one. We had the wedding and a little ceremony and Joe left immediately the next day for the nation's cup.

Being a wife and mother at my age (21) was a bit difficult at first, especially for my husband. But fortunately he had so much patience and I have gotten loads of advise on how to go about it all, and when I put them to practice, they work. At the rate at which we are going and by God's grace, it's going to be much much better than how beautiful it is now.