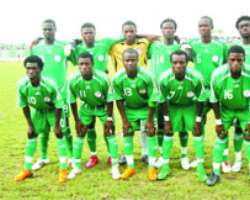 The Nigeria's Under-20 national team has been drawn in Group D of the FIFA Under-20 World Championship and will play against Croatia, Saudi Arabia and Guatemala.

Nigeria's Flying Eagles will kick off their World Cup campaign against Concacaf representative, Guatemala, in the Colombian city of Armenia on July 31. On August 3, John Obuh's men will file out against unarguably their biggest opposition in Group D, Croatia, also in Armenia before moving to the city of Pereira to round off their preliminary round against Saudi Arabia on August 6.

However, Cameroon's Cubs appear to have been handed a tough draw as they confront former champion, Portugal, Uruguay and the champion of Oceania in Group B. The Malian Under-20s also got themselves a handful of opponents as they will face host, Colombia, France and Korea Republic in the cities of Bogota and Cali.

Egypt's Young Pharaohs will play in Barranquilla and Cartagena against Brazil, Austria and Panama.

The draw for the FIFA Under-20 World Championship was held in Cartagena, Colombia from 1a.m local time.

The Under-20 World Cup will take place in seven Colombian cities between July 29 and August 20, 2011.