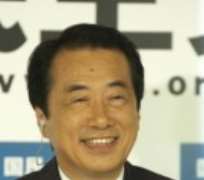 The magnitude 7.0 aftershock, which trapped some people in collapsed homes, came just hours after residents bowed their heads and wept in ceremonies to mark a month since a massive earthquake and tsunami killed up to 25,000 people and set off radiation leaks at the nuclear plant by knocking out its cooling systems.

'Even after a month, I still cry when I watch the news,' said Marina Seito, 19, a student at a junior college who recalled being in a basement restaurant in Sendai when the original 9.0-magnitude earthquake hit on March 11. Plates fell and parts of the ceiling crashed down around her.

Officials said yesterday's aftershock did not endanger operations at the tsunami-flooded Fukushima Dai-ichi nuclear complex, where power was cut but quickly restored. The epicenter was just inland and about 100 miles (160 kilometres) north of Tokyo.

But a nuclear safety official said repeated strong aftershocks – another large quake hit last Thursday – were slowing work at the plant, and said that if one of them were to spawn a tsunami, the complex would be just as vulnerable as on March 11.

'At the moment, no tsunami resistance has been added to the plant. At the moment, there is nothing we can do about it,' said Hidehiko Nishiyama of Japan's Nuclear and Industrial Safety Agency.

With the crisis dragging on, residents of five more communities, some of them more than 20 miles (30 kilometers) from the plant, were urged to evacuate within a month because of high levels of radiation, Chief Cabinet Secretary Yukio Edano told reporters. People living in a 12-mile (20-kilometre) radius around the plant already have been evacuated.

'This is not an emergency measure that people have to evacuate immediately,' he said. 'We have decided this measure based on long-term health risks.'

Edano sounded a grave note, acknowledging that 'the nuclear accident has not stabilized' and that 'we cannot deny the possibility the situation could get worse.'

The latest quake spooked people yet again in a disaster-weary northeastern Japan. Customers in a large electronics store in Sendai screamed and ran outside and mothers grabbed their children.

In Iwaki, a city close to the quake's epicenter, three houses collapsed and up to seven people were believed trapped inside. Two were later rescued, city fire department spokesman Takumi Namoto said. Their condition, and the fate of the others, was not immediately known.

Japanese officials said the quake had a magnitude of 7.0, but the U.S. Geological Survey said it measured 6.6.

With workers still far from bringing the Fukushima Dai-ichi plant under control, the bodies of thousands of tsunami victims yet to be found and more than 150,000 people living in shelters, there was little time Monday for reflection on Japan's worst disaster since World War II.

People in hard-hit towns gathered for ceremonies at 2:46 p.m., the exact moment of the massive quake a month earlier.

'My chest has been ripped open by the suffering and pain that this disaster has caused the people of our prefecture,' said Yuhei Sato, the governor of Fukushima, which saw its coastal areas devastated by the tsunami and is home to the damaged plant at the center of the nuclear crisis. 'I have no words to express my sorrow.'

In a devastated coastal neighborhood in the city of Natori, three dozen firemen and soldiers removed their hats and helmets and joined hands atop a small hill that has become a memorial for the dead. Earlier, four monks in pointed hats rang a prayer bell there as they chanted for those killed.

The noisy clatter of construction equipment ceased briefly as crane operators stood outside their vehicles and bowed their heads.

In the industrial town of Kamaishi, Iwate Gov. Takuya Tasso led a moment of commemoration as a loud siren rang through a high school gymnasium being used as a shelter. He bowed while people who have lived there since the tsunami kneeled on makeshift futons, bowed their heads and clasped their hands.

The school's students will return to classes today even though 129 people are living in their gym. Some, like 16-year-old Keisuke Shirato, wore their baseball uniforms for yesterday's ceremony. Shirato's family was not affected by the tsunami, but about half of his teammates lost their homes.