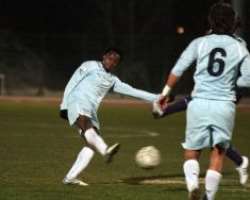 Nigerian teen football prodigies Sani Emmanuel and Ogenyi Onazi have been in the news ever since their successful run with the Golden Eaglets at the FIFA U-17 World Cup in 2009 and their subsequent trials with Premiership giants Chelsea and Tottenham.

Speculation was rife as to where the duo would end up, with reported interest from several major European clubs. However, last week the news was officially announced that the pair, both products of Pastor T.B. Joshua's charitable youth academy 'My People FC', had signed professional contracts with SS Lazio in Italy and were already training with the senior team.

Lazio, who are currently 5th in Serie A, are set to play a crunch match against 3rdplaced Napoli tomorrow, and Onazi has surprisingly been handed his debut by Coach Edoardo Reja. Reja, who is said to be impressed by the skill and stamina of the young Nigerian attacking midfielder, as well as the way he has quickly adapted to the Italian style of play, will hope Onazi can help his team break the duck of eight winless games in their last nine away fixtures.

For Onazi, who only turned 18 some months ago, it is a truly dream come true. Injury in his first game for Nigeria at the U-17 World Cup marred his chances of international exposure, as his colleague Sani Emmanuel stole the show and grabbed the headlines at the cadet event, coming out as the MVP of the tournament, as well as the joint highest scorer. However this Saturday, all eyes will be on Onazi, who will have the opportunity to show his worth on the world stage against bigger and more experienced opponents.

After a blistering volleyed goal helped Lazio to a 3-0 win against Anderlecht in the Viareggio Tournament a fortnight ago, Onazi has been touted by the Italian press as a star for the future. This Saturday could be his chance to prove it.

The fixture is scheduled to start at 11:30 BST at San Paolo Stadium in Napoli.