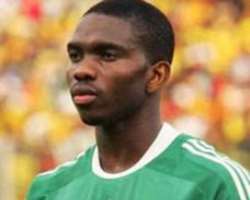 High marks! That is what Super Eagles' skipper, Yobo Joseph earned after last weekend's Nations Cup qualifier against Ethiopia and the five star rating is coming from ex-international, Moses Kpakor.

Kpakor, a member of the Clemens Westerhof's Algiers '90 Eagles that won silver medal told Daily Sunsports moments after the 4-0 drubbing of the East Africans that Yobo, whose career with the national team has spanned over a decade is doing what he called a 'yeoman's job' in the heart of Eagles' defense.

Kpakor noted that the Eagles need to have an experienced defender in the class of Yobo to be organised, even as he stressed that England based forward, Obafemi Martins is still an important member of the squad despite not featuring against Ethiopia.

In kpakor's words: 'Yobo is doing a yeoman's job in the heart of Eagles' defense.

He knows what to do and he commands the respect of his team mates. I think Samson Siasia did the right thing by retaining him in the team and not settling for a new lad in that position. 'Just like Yobo, Martins is still relevant despite the good showing of the like of Peter Utaka, Ike Uche, and Victor Anichebe upfront. Martins on a good day can swing things in favour of the Eagles.'

Kpakor stated that the Eagles played under pressure against Ethiopia since Nigerian soccer fans wanted to see them whitewash the visitors, a situation which he said affected their game, especially in the first half.

'Being the first competitive game under Siasia, the boys were under pressure to perform and that affected their game. That informed why they didn't quite click in the first half. Now that they have started well, I see them getting better in their subsequent games.

'For me, what matters now should not be the score line, but how well the team is playing. Nigerians want to see them play good football, unlike in the past when, fans leave the stadium disappointed even when we win.'

The Eagles who mid week beat Kenya 3-0 are billed to face Argentina in a grade A international friendly at the Abuja National Stadium on June 1, a match which would no doubt be Siasia's real litmus test.