HOMEBOY WHO DINES WITH BIG BOYS 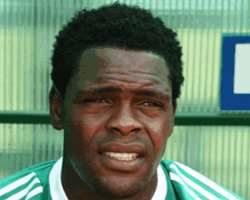 Heartland's defender, Chibuzor Okonkwo is warming his way towards capturing a permanent shirt in the new Super Eagles under Coach Samson Siasia, who has remained a long time admirer of the utility player.

Ignored by the trio of Shaibu Amodu, Lars Lagerback and Austin Eguavoen, who lacked confidence in using Nigerian Premier League (NPL) stars in their teams, Okonkwo remained diligent in his 'vineyard' and the appointment of the former Under-23 boss (Siasia) as Super Eagles' supremo, changed his destiny.

Okonkwo is clearly the biggest beneficiary of the new order in the Super Eagles, where Siasia and his backroom staff have promised to give the NPL stars enough playing time once they convince the coaches of their abilities.

For a player, who excelled at the Beijing 2008 Olympics, it's sad that he was left in the wilderness because he plies his trade in the domestic league. But it's no surprise to pundits that Siasia has made the former Gabros International and Bayelsa United star his first choice at the right fullback position.

In recent times, Al-Hilal defender, Yusuf Muhammed, Skoda Xanthi's Olufemi Adebayo and former Lobi Stars' defender, Terna Suswan, who has since joined Victoria Setubal in Portugal, have also played at the same position, but Siasia appears to have made Okonkwo his permanent answer to the problems in that position considering the outcome of Eagles' matches with Sierra Leone and Ethiopia.

Okonkwo warmed his way into Siasia's heart when he was chosen ahead of Europe-based Elderson Echiejile for the famous Olympic qualifier against Ghana in Accra. Siasia needed an outright victory or a draw to boost his chances of picking a ticket to the Olympics and headed for Ghana with a crack team composed of both foreign and home-based players.

Sunderland's star, Asamoah Gyan, then with Italian side, Udinese, was one of the top stars in Ghana's Under-23. Nigeria eventually secured the required result after 90 minutes and Siasia acknowledged the role played by Okonkwo et al, as Gyan tried in vain to score in front of a vociferous home crowd.

Okonkwo also confirmed his versatility at the Olympics, where he excelled at the unfamiliar left fullback position following the absence of Taye Taiwo. In fact, he struck a famous thunderbolt almost similar to that of former Super Eagles' skipper, Sunday Oliseh, as Nigeria crushed Belgium to underscore his influence in the team.

Before his first competitive cap against Ethiopia on Sunday, Okonkwo played in an international friendly against Congo DR in 2010 and played a cameo role as a Nigerian home-based squad excelled at the last WAFU Cup in Abuja.

Interestingly, Suswan, who played ahead of him at the WAFU Cup, has now moved down to the Under-23 national team. The Portuguese-based Suswan was present when the Under-23 team battered Equatorial Guinea 5-0 on Saturday.

This year has turned out to be glorious for him, as he was back to his position when Nigeria earned a 2-1 win over Sierra Leone in an international friendly in Lagos.

'It's good to be in the Super Eagles. It shows that I have continued to do well since the Olympics in Beijing,' Okonkwo told SuperSport.com. 'The coach has confidence in me and I don't want to let him down.

'I always work hard to give my best on match days and I'm pleased with the results so far.

'My ambition is to continue to do well whenever the opportunity arises since that's the only way to guarantee my subsequent invitations.'

Caretaker coach of Heartland and Nigeria Football Federation's Technical Committee member, Christian Chukwu, wants other players in the local league to see Okonkwo's presence in the senior national team as a challenge to work hard and prove to the coaches the stuff they are made of.

'I want to commend Okonkwo for his performance because he has shown that playing in the NPL is not a barrier to joining the Super Eagles. Other players in the domestic league should know that once they are in good shape, Siasia will definitely look at their direction,' Chukwu said to SuperSport.com.

Sunshine Stars' Head Coach, Gbenga Ogunbote, described the development as a sign of good things ahead.

'Okonkwo's performance is good for the league. It means the NPL stars are not training anymore.'

Okonkwo's consistency has already put him in the radar of several European teams. He has been linked to English Premier League side, Stoke City and Russian side, FC Rostov.