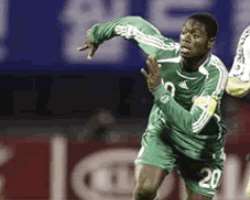 Lukman
Eagles' Coach, Samson Siasia, has recalled the trio of Haruna Lukman, Ekigho Ehiosun and Nnamdi Oduamadi to his squad that will face Kenya.

Siasia told Daily Sunsports before his side filled out to face Ethiopia in a Nations Cup qualifying math at the National Staduim, Abuja that he was amazed at the type of football the trio played for the Olympic team against Equatorial Guinea on Saturday.

' Lukman, Ehiosun and Oduamadi are special players and they proved that against Equitorial Guinea on Saturday. The performance has earned them a recall to the national team squad that will face Kenya.

'I saw the potentialities in these players and insisted that they remained with the Super Eagles but I had to release them to fortify the Olympic team since they are still eligible to play there'. Nnamdi Oduamadi impressed with a man-of-the-match display that suggested the A.C Milan's man is cut for a bright future. The result could have, however, been so different had Boriba and Anselamo converted gilt-edged opportunities when the score was still just 2-0 to Nigeria.

In the event, it was the Nigerians who finished the first half and the game with their feet firmly on the accelerator. It could have even been worse for the Guineans if Nigerian's captain, Haruna, had converted a late penalty. 'We have done quite well but we are not resting on our oars,' an impassioned coach Austin 'Cerezo' Eguavoen said.