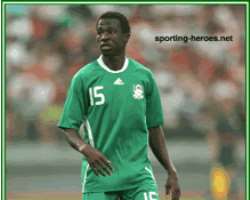 •• Ambrose
Ashod FC of Israel's defender, Efe Ambrose, says he will be gunning for a starting shirt when Nigeria's Super Eagles battle Ethiopia in an Africa Cup of Nations qualifier on March 27.

Ambrose disclosed that his switch to Israel last year from the Nigeria Premier League has made him a far better player now armed with full confidence to grab his surprise Eagles' chance with both hands.

Ambrose was handed a surprise invitation by Coach Samson Siasia for the crucial qualifier against Ethiopia in Abuja. The Kaduna United's former skipper is now pitched against fellow Beijing Olympics teammate Ayodele Adeleye for the chance to play alongside skipper Joseph Yobo in the heart of the Eagles defence.

'I won't let this chance slip as I am determined to win a starting spot in the team'.

'Playing in the Eagles is not a child's play but my time at Ashod, where I play day in, day out, with some of the best players in the Israeli league, has really toughened and improved me as a player.

'I believe I have a good chance now to play in central defence. I also know it won't be easy because I'm up against other top players, but with hard work on my part I should play there.'

Ambrose has every reason to be ecstatic about his Eagles call-up because two years ago, he was almost forced to quit after he was diagnosed with an enlarged heart. However, a second test gave him a clean bill of health and he was part of the Dream Team IV who reached the final of the 2008 Olympics.

The defender said that the Eagles will topple Guinea at the top of Group B of the qualifying series for the 2012 Nations Cup on their way to the tournament in Gabon and Equatorial Guinea.

'I know that we are trailing Guinea for now but we have the joker of beating them in the return leg in Nigeria to still pick the ticket. What we need do is to win our remaining matches and we will be home and dry,' predicted the player, who is also comfortable playing as a defensive midfielder.