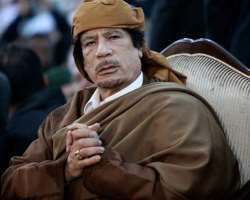 Two Arab newspapers and al Jazeera television said Monday Libyan leader Muammar Gaddafi was looking for an agreement allowing him to step down, but there was no official confirmation of the reports.

Al Jazeera said Gaddafi had proposed to Libyan rebels to hold a meeting of parliament to pave the way for him to step down with certain guarantees.

It said Gaddafi made the proposal to the interim council, which speaks for mostly eastern areas controlled by his opponents. It quoted sources in the council as saying Gaddafi wanted guarantees of personal safety for him and his family and a pledge that they not be put on trial.

Al Jazeera said sources from the council told its correspondent in Benghazi that the offer was rejected because it would have amounted to an "honorable" exit for Gaddafi and would offend his victims.

The London-based daily Asharq al-Awsat and the daily al-Bayan, based in the United Arab Emirates, also cited unnamed sources as saying Gaddafi was looking for an agreement.

A source close to the council told Reuters he had heard that "one formula being proposed by the other side would see Gaddafi hand power to the head of parliament and leave the country with a certain guaranteed sum of money."

"I was told that this issue of money is a serious obstacle from the national council's point of view," he said, adding that his information came from a single source close to the council.

Essam Gheriani, a media officer for the council, said: "No such offer has been put to the council as far as I am aware."

APPEAL FOR DIALOGUE
Jadallah Azous Al-Talhi, a leading member of the ruling establishment and a prime minister in the 1980s, appealed to rebel leaders for dialogue Monday, in the clearest sign yet Gaddafi may be ready to compromise with opponents challenging his four-decade rule.

The fact that state television screened Talhi's appeal indicated that it was officially endorsed.

But the council said there was no room for broad dialogue with Gaddafi and any talks must be on the basis that he quits.