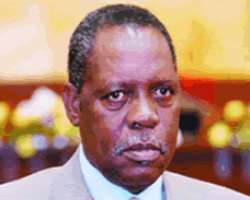 Confederation of African Football's (CAF) President, Issa Hayatou has described the year 2010 as an exceptional year. According to him, for the first time, the continent was accorded the rights to organise the World Cup, 53 years after the creation of CAF. Never before had Africa received such a global recognition.

'It was a formidable experience that came to brighten a continent that many had known for conflicts, natural disasters, diseases and unemployment. Two events however came to remind us about certain realities we live with, which are very shocking.

'2010 started with an abominable drama, the attack on the Togolese bus travelling for the Orange Africa Cup of Nations in the Angolan province of Cabinda.

The tournament was, for the first time, organised by a Portuguese speaking country and the attack by a group of rebels led to the death of Assistant Coach Abalo Amelete and the Communication Officer Stanislas Ocloo. It also incapacitated goalkeeper Kodjovi Obilale and became a trauma for the entire delegation. Much was said and even written and there were fingers pointed at the Confederation's head.

'I do not want to be exonorated from my responsibilities but just to recall that CAF is not a state, that the body has no army, and that its role is to ensure the organising country respects the terms of the hosting agreements. Its mission is, apart from the smooth holding of the competition, to bring peace, friendship and fraternity. '2010 ended with the suspension of several Africans, including three members of the Executive Committee of CAF by FIFA. Who would have imagined that such a scandal would have engulfed the continent. The sanction meted out by the Ethics Committee of FIFA came as a huge surprise to us. Those concerned have already sought redress in the various jurisdictions of appeal.

'It is still premature to talk about it when the final decisions have not been made. I would want to recall here that CAF is the guarantor of its statutes, its laws and regulations that it applies to all actors of the game, including referees, administrators, and even those who in one way or the other are involved in the game.

'It is difficult in such painful and challenging conditions to speak of what takes place in our respective stadia. But how can we not pay glowing tribute to South Africa that brought pride to the continent. What did they not say before the World Cup? That South Africa will not be able to host the competition, that there will be no fans in the stadiums, that foreign visitors will not make it, and that security will be a problem.

'But the events spoke for themselves. Africa gave a strong signal to the rest of the World to the extent that the President of the International Olympic Committee IOC, Jacques Rogge, suggested the candidature of an African city to host the Olympic Games. It would really be a good thing if that wish were to come true as there were virtually no criticisms following the organisation of the World Cup.

'On the contrary, I received several complaints from our World Cup representatives. Apart from Ghana that reached the quarter finals and being the third African team to reach that milestone, the other five representatives did not go past the first round. It is not the role of CAF to interfere in the management of respective national federations. But like many of us, I would say we were not totally disappointed by the results.