HARD TACKLES FROM BOYS MADE ME A BETTER PLAYER - OBENDE 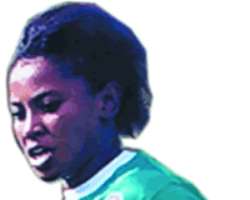 Obende
She grew up in the midst of seven brothers in a polygamous family of nine. As the baby of the house, she had her elder brothers as playmates and thus, would always join them whenever they go out to play street soccer with their friends.

And to keep up with the older ones in the mastery of the game, she would always resort to packing sucked oranges in nylon bags to improvise for footballs. This is the interesting story of Super Falcons' player, Abiodun Obende, who now blazes the trail in the women professional league in Finland.

The player, who ran around the dusty streets of the Boundary Area of Ajegunle, Lagos State kicking oranges, has risen from her humble beginning to become the striking queen of her Finnish club, KPV Kokkolan Pr. with nine goals to her credit last season.

Recently, Sunday Sunsports rounded up the 23-year-old Edo State-born player, who breezed into the country for her father's burial and Super Falcons' first phase camping exercise in preparation for the 2011 FIFA Women's World Cup in Germany. While narrating her experience as a Nigerian playing in a foreign land, the soft-spoken striker disclosed that despite spending four years in Finland already, she has yet to master the culinary culture of the Finish people.

'I went to Finland in April 2007 for trials and it was very difficult adjusting from the warm weather in Nigeria to the cold climate in that place. There was heaps of snow everywhere because that time of the year was the height of winter in Finland,' she began.

'I play for KPV Kokkolan Pr. In my first trial match with the club, I scored the only and winning goal of the game, but I could not celebrate my feat because of the biting cold. Usually, in April and May each year, matches in Finland are played indoors, but that trial match with my club was played outside. So, I was shivering severely while playing the game and was dame too lucky to have scored the goal that gave the club victory.

'I have gradually adapted to the weather condition in Finland, but I still find it difficult to eat their food. Their bread for instance, comes out black, which is distasteful to my liking. So I always resort to baking my own bread and cooking Nigerian dishes if I must eat and get satisfied. And each time I cook, I share the food with some of my teammates, including my Nigerian colleagues – Adisa Grace, Funsho Alake and Hadijat Aliu.'

Thrilled by the invitation extended to her by Super Falcons' Coach Uche Eucharia, as the team prepares for the World Cup in Germany, the lanky Obende believes that she would make the difference in Germany if given the opportunity to don the Nigerian colours at the Mundial.

'I strongly believe that I have the qualities that Coach Uche needs to execute the World Cup in Germany. I only need to work harder to be part of the team. The national team is usually competitive, but I know that I will break into it; I have no doubt in my mind about that.