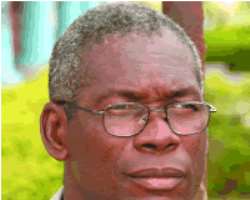 Onyeacholam
National swimming coach and a member of the Technical Committee of Nigeria Swimming Federation (NSF), Steve Onyeacholam, would certainly have wished that he's still a young athlete of this generation because he would certainly have benefited from today's coaches, who he said are more flexible in their decisions.

Perhaps, this would have seen some top administrators making a case for him as the number one freestyle swimmer in the country in his heyday. But that was not to be, as he sensationally revealed that his white coach, Mr Watts stuck to his guns and insisted that he would not be part of the 1970 Edinburgh Commonwealth Games for his failure to make the time trials ahead of the Games.

In a recent telephone chat with Sunday Sunsports, the Delta State-born swimming coach, revealed that he and two other swimmers missed the 1970 Commonwealth Games in Scotland because of his inability to meet the time set for him by their British coach.

According to the chairman of the Technical Committee of Delta State Sports Council, he was the number one freestyle swimmer in the country then and was looked upon to lead the Nigerian three-man swimming team to Edinburgh to represent the country at the 1970 Commonwealth Games. He regretted that he could not make the contingent to Scotland because he could not meet the 1.5 seconds record the late Mr Watts set for him.

That development got him traumatized up to the point that he contemplated quitting the aquatic sport. As the number one freestyle swimmer in the country and head of the swimming group, the coach had wanted to use the time he set for him as a yardstick to judge other swimmers. But when he could not make the mark, all the swimmers (Christopher Adigupe and Joseph Atekape, who are now dead), including himself, were denied the Edinburgh trip.

According to him, the disappointment of not making it to Edinburgh, weighed him down so much, especially when he recalled that it was his failure to beat the time that also cost his colleagues the opportunity of being at the 1970 Games.

However, Onyeacholam said that apart from the sad experience of not making it to the Games in Edinburgh, there has never been a time again he regretted making swimming his chosen sport. He said he loves swimming as a sport because of the discipline it commands, and that for him, swimming remains fun just as it were during his competitive days, when he and his friends would always stay back at the swimming pool even after trainings with their coach.

'The only time I considered quitting swimming was when my coach, Mr Watts, a Briton, denied me the opportunity of going to the Commonwealth Games in Edinburgh, Scotland in 1970, simply because I could not meet the 1.5 seconds record time he set for me while in preparation for the Games,' the former swimmer began.

'We were three in our swimming group and I was number one in freestyle. Our coach had planned to take us to Edinburgh for the freestyle event on the condition that I, as the number one freestyle swimmer in the country, must meet the 1.5 seconds time he set of me. But unfortunately, I failed to meet the target and so, he denied us the opportunity of making the trip to Edinburgh in 1970.

'The bad day came after our qualifiers and when I could not beat the set time, our dream of going to Scotland was dashed, and Nigeria was not represented in the swimming event at the Games.

'That development left me devastated that I considered quitting the sport, thank God I had a rethink. But one thing that weighed me down so much was that it was my failure to beat the set time that cost Nigeria her representation in the swimming event at the 1970 Games.

'Whenever I think of that calamity and also the guilt of denying two of my colleagues the luxury of being part of the Edinburgh Games, I feel bad,' he stated.