NO LOOKING BACK -NSOFOR 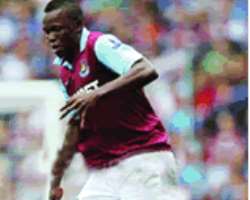 Victor Obinna has dedicated his FA Cup hat-trick to the West Ham United's supporters, he admitted, he let down by being sent-off in the Carling Cup semi-final against Birmingham City. The Nigerian star netted his first treble in English football in Saturday's 3-2 fourth-round win over Nottingham Forest, helping the Hammers to set-up a last-16 meeting with Burnley at the Boleyn Ground.

While Obinna was delighted to collect a matchball signed by his jubilant team-mates, he conceded that he had let both them and the club's fans down by being red-carded in the first-leg for kicking Birmingham's winger, Sebastian Larsson.

'I was very stupid to get suspended that way. It happens in football but I apologise to the fans about that. I was mad with myself after the game because I left my team-mates with 10 men and I had to miss three games.

'I didn't know I was missing three games until later, so I apologise to the fans and take full responsibility for that and it is definitely something that will never happen again.'

One thing Obinna hopes will happen again and again is netting a hat-trick such as the one he scored against Forest on Sunday.

The 23-year-old was naturally pleased with his personal haul, but also happy to help the team make it through to the fifth round after an indifferent first-half display against the Championship promotion hopefuls.

'It was a fantastic game. We didn't play very well in the first half. I think the first half was poor but we were able to level at half-time, which was very important.

'I think the second half was better than the first. We created so many chances to be able to have won 5-2. Freddie Piquionne had some chances and their goalkeeper was good. The third goal was a clear penalty.

'I thought we deserved to win the game, but the first half was really poor. It was a fantastic game for the fans. After the disappointment against Birmingham in the Carling Cup, everybody was down but I think we just have to move on because that is football.

'Most of all, we have to take our winning mentality into the Premier League, which is our priority this season.'

The highlight of Obinna's treble was his second goal, even if the forward admitted he had not exactly meant to beat the Forest's goalkeeper with a swerving, dipping 30-yard strike from near the right touchline.

'Well, so many people have asked me about the same thing! As a striker, the most important thing is to put the ball in the back of the net. I was a bit lucky for that goal.

'It was a mix. I wanted to cross and I wanted to shoot but in the end it went in, so I was very happy.

'In England, it is the first hat-trick I have scored. I scored one in Italy. I scored one in Serie B for Chievo Verona against – I can't remember the team we played, but it was a fantastic hat-trick! They were good goals!

'This (ball) is really nice. Maybe my Mum will be able to keep it!'