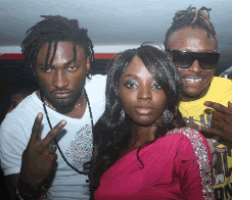 It was truly a sight to behold and cherish last weekend when pretty Ivie Okujaye, the AMBO 5 winner and some of her lucky pals cruised around Lagos and later stormed some top of the range clubs on the Island in a branded white Hummer Limousine. The fun-filled and memorable groove made a central stopover at the Aura Lounge on Ademola Adetokunbo Street, Victoria Island, amid applause and ovation.

In attendance were A-list celebrities, which cuts across acting, music, comedy and sports. The roll call included: Julius Agwu, Terry G and Uti Nwachukwu of BBA, among others. Several choice drinks and champagne graced the red carpet event with yelling fans all out to catch a glimpse of their favourite stars.

According to Dapo Aderele, partner, Aura Lounge, the limo party was a novel concept in mobile clubbing, which creates an atmosphere of stardom for the celebrities. 'The city of Lagos is a unique state with an aquatic splendor which resonates a feeling of love when it is night time', he added.

Mercy Godwin, one of Ivie's friends and a former classmate at Queen's College, Lagos, commented on the style and panache which Amstel Malta deployed in celebrating the AMBO 5 winner. She hinted that in all her life, she has never had so much fun in one night.

The reality queen in the company of her friends later hit the dance floor and wriggled their waists to hit tunes till the wee hours of the following morning. Meanwhile, the shooting of her new movie, which is part of the prize package for the AMBO 5 winner had other build-up activities which included: gracing the Okin Oge beauty pageant, co-presenting of awards to winners at the Dynamix Youth Awards and the Future Awards, holding soon.