THE PEOPLE'S REVOLT IN TUNISIA 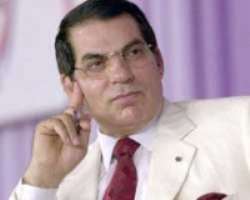 LAST week, in ways reminiscent of the deluge of political protests that heralded national conferences in French West Africa in the late 1980s, which consequently ushered in political liberalisation in the form of democratisation of institutions of governments, the peoples of Tunisia sacked the government of President Zine El Abidine Ben Ali in waves of sustained violent protest.

It would be recalled that President Ali had been in power since 1987 and had ruled the North African nation with iron fist amidst economic prosperity. He guaranteed a measure of stability, a fact that had made the country investors' destination. However, the deepening of the authoritarian structures and suppression of political freedoms were contradictions which later unraveled to produce the present outcome.

Earlier in December 2010, an unlicensed street merchant Mohamed Bouazizi whose cart was confiscated by police on the streets of Sidi Bouzid set himself ablaze. This act of self-immolation sparked off a wave of protest fed more by disaffection with the authoritarian reign of the ousted president and the crippling economic recession in the country which had resulted in massive unemployment among the teeming population. Indeed, the country's unemployment rate is currently put at about 14 per cent.

In the midst of the protest, President Ali had made a knee-jerk response in the form of palliatives such as opening up of the public sphere, holding of parliamentary elections and promise of creation of some 300,000 new jobs. These measures were too late to change the course of events in the country of the Berbers desirous of political change. The President was forced to step down and subsequently fled to Saudi Arabia. This was at great cost. Many protesters were either killed or wounded.  Both official and unofficial estimates had put the number of lives lost at between 23 and 60.

Although, the parliamentary Speaker Foued Mebazaa has been sworn in as interim president and Prime Minister Mohammed Ghannouchi has announced a government of national unity - a hodgepodge of the old guards and some opposition figures - the Tunisian people have demurred the new arrangement. All they want is new wine in a new bottle. Extreme tact is therefore required on the part of the current minders of the country to steer the country ahead of presidential elections due in two months. Keeping faith with the new social contract to respect the constitution and implement the political, economic and social reforms is key to stability.

This new political development in Tunisia has a lot of lessons for authoritarian governments all over Africa who often take the sensibilities of their people for granted. First, the lesson goes to Tunisia's North African neighbours where tin-pot dictators hold sway and political freedoms are brutally repressed. It is high time they commenced liberalization of their political spaces to allow political expression by their own people. Obviously, a managed transition is a better option to some unmanageable chaos.

Generally, it demonstrates once again that sovereignty ultimately resides in the people not interim occupants of state houses. Historically, this has often been proven. Three, the well-being and happiness of the people are the end of government and whenever any government is unable to fulfill this goal, it has no business being in power. Importantly, the Tunisian armed forces deserve  a pat on the back for its demonstrable impartiality in the on-going crisis; its stance will help the process of national reconciliation and reconstruction.

While not losing focus of the above lessons, there is the urgent need for friends of Tunisia to stand by the people and leaders of the country to ensure a smooth transition to a plural, democratic society. It is important because transition moments that are not well-managed, could snowball into severe civil conflicts. The fact that the Constitutional Democratic Rally (RDC) has held sway in Tunisia in a one-party rule for nearly half a century makes the intervention of the international community, the more imperative.