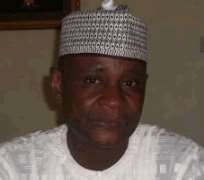 Maigari
A Federal High Court sitting in Lagos on Wednesday adjourned till February 3, hearing on a motion filed by the Registered Trustees of the National Association of Nigerian Footballers (NANF) to relist its earlier suit which was struck out by the court.

Justice Okon Efreti Abang fixed the date after the plaintiff's counsel, Aideloje Belo, informed the court that he was unable to serve the defendants the said motion as ordered by the court last week.

Belo had expressed surprise on the presence of NFF's counsel, Zainab Ganu, from Joseph Nwobike ( SAN's) chambers even when he was unable to serve them.

The defence counsel, who announced her appearance under protest said, the NFF got winds of the suit last week and decided to attend the court session Countering, Bello submitted: 'My Lord pursuant to the order of Wednesday last week, we are not able to serve the defendant, but I am shocked that there is representation for the defendants in court today' After listening to the argument, Justice Abang adjourned the matter till Febraury3, 2011 for argument on the motion.

NFF's counsel, Dr Joseph Nwobike (SAN), has, however, debunked media reports that the Aminu Maigari-led board had been sacked by order of the court. The lawyer stressed that there was no iota of truth in the report and that the court only fixed February 3 for hearing of the motion on notice filed by the National Association of Nigerian Footballers (NANF) seeking to relist a suit it willingly discontinued against the NFF and others.

According to him, the court cannot make order in a vacuum as he has not been properly served with the processes which led to the adjournment of argument on the matter.

It will be recalled that the court had on September 6, 2010 voided the elections conducted on August 26, 2010 into the Board and Congress of the NFF. But NANF in its motion, seeking to relist the suit said the Board and Congress of the NFF impudently disobeyed that order upon the discontinuance of the suit. NANF had filed the suit against the NFF and others, alleging that the process of the elections was perfected without recourse to its members contrary to the clear wordings of FIFA statute and other extant laws relating to football administration in Nigeria.

Joined as co-defendants to the suit are: NFF's sacked president, Aminu Maigari; President of the Nigerian Premier League (NPL) Board, Davidson Owumi; the Minister of Sports, Ibrahim Isa Bio; Director General of Sports in the Federal Sports Ministry; Patrick Ekeji and NFF's electoral committee chairman, A.U Mustapha. Justice Abang had earlier on held that it would be improper to allow the elections to take place when there was a pending motion before the court, seeking to restrain the conduct of the elections. Specifically, the court ordered parties to maintain the status quo (ante bellum) pending the determination of the NANF's motion.

NANF's President, Harrison Jalla, who deposed to the affidavit in support of the suit, maintained that he was the official representative of the players' union at the General Assebbly of the NFF. The plaintiff (NANF) had sought an ex-parte injunction to restrain the defendants from going ahead with the elections, but the request was deferred by the presiding judge, Justice Okon Abang, who directed the plaintiff to put the respondents on notice.

NANF's President, Harrison Jalla, who deposed to the affidavit in support of the suit, maintained that he was the official representative of the players' union at the General Assembly(s) of NFF in 2004, 2005 and 2006, but that he was 'strangely' excluded from subsequent assemblies under various guises to stultify NANF's activities.