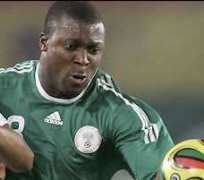 Although the report from England says Yakubu is expected to join the Foxes until end of the current season, the 28-year-old out-of-form Super Eagles' striker would be linking forces with England' former coach, Sven-Goran Eriksson's, side with a view to a permanent move in the summer.

Although Yak initially stalled on accepting to join Eriksson's squad, reality soon dawned on him that his days of relevance at Goodison Park were numbered and he needed a new lease of life elsewhere to keep his career running much longer.

Yakubu has started only eight games for the Toffees this term, with only one goal to his name and is obviously unsettled at Everton, but was initially thinking of the joining West Ham United.

The former Okiomu Oil of Benin City, Julius Berger of Lagos, Maccabi Haifa of Israel as well as ex-Portsmouth and Middlesbrough of England striker has struggled to find his best form after an eight-month lay-off with an Achilles injury between 2008 and 2009.