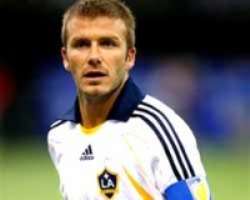 DAVID Beckham's four-week training spell at Tottenham began yesterday morning when he arrived at the club's training ground for a medical.

According to Sportinglife, the Los Angeles Galaxy star reported to the club's training facility in Chigwell, Essex, at 1015 and did not speak to any of the five camera crews or dozen photographers that were waiting for him.

The 35-year old is now meeting the club's medical staff and will undergo a fitness test as he looks to keep himself in shape during the Major League Soccer close season. Beckham will train with his new team-mates for the first time today and his time at the club is due to end on February 10, when he will return to Los Angeles.

Spurs started negotiations with the MLS side last week over a two-month loan deal but the north London club announced that Beckham would only come to train with the club, rather than play. It is thought that Spurs is unwilling to pay the percentage of Beckham's wages that the Galaxy is demanding.

The Galaxy is also wary of its prize asset becoming injured during any loan spell, as Beckham did during his spell at AC Milan last year when he tore his Achilles. Tottenham's boss, Harry Redknapp, is still keen to see Beckham play in a Spurs shirt though and negotiations about a loan deal are ongoing.

Beckham has not played for an English club since he turned out for Manchester United on the final day of the 2002-03 season. He emerged from the medical at 11.50 in a light blue Tottenham tracksuit with two advisers before leaving the training complex in a black Audi.

He will return to Chigwell at around 10a.m tomorrow morning to train with the Spurs first-team squad, which takes on Beckham's former club, Manchester United, on Sunday.