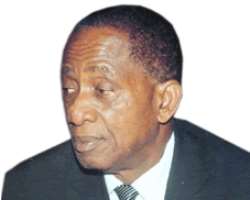 •Chibundu
Leadership in business is just like charity, it must begin at home. According to Professor Emmanuel Chibundu, a former World Bank consultant, who is presently a visiting professor at the Strategic Business School Lekki, Lagos, there is no way one's relationship with one's children and spouse at home will not translate into the person's business activities.

'So if you are a good father and have understanding, integrity, truthfulness, transparency and ethical conduct, you will equally be a good business leader and vice versa.' In this chat with Daily Sun, he explained the concept of leadership both in business and in the family. Excerpts:

Managerial Leadership.
In defining leadership, I will quote Ralph M. Stoghill in his survey of leadership theories and research. He said that 'there are almost as many different definitions of leadership as there are persons who have attempted to define the concept.' We will define managerial as the process of directing and influencing the task-related activities of group members. It has four important implications. First, leadership involves other people who by their willingness to accept directions from the leader, group members define the leader's status and make the leadership process possible. Second, leadership involves an unequal distribution of power between leaders and group members. Group members are not powerless even though the leader has more power.

This aspect combines the first three and acknowledges that leadership is about values. James McGregor Burns is another authority who argues that the leader who ignores the moral components of leadership may well go down in history as a scoundrel, or worse. He said that moral leadership concerns values and requires that followers be given enough knowledge of alternatives to make intelligent choices when it comes to the time to respond to a leader's proposal to lead.

In talking about types of leadership, a laisse faire leader is not interested in getting goals for the group. Productivity is generally low and work is very sloppy. The group has no interest in their work because of the non-challant attitude of the leader. Morale and team work are often low. An autocratic leader is always conscious of his position and has little trust and faith in his subordinates. He feels that pay is a just reward for work and that it is the only rewards that can motivate workers.

The leader gives order and insists that it be carried out without questioning whether the order is good or not. Production is normally very high when the leader is present but lowers when the leader is absent. The democratic leader and the group allows for decision making to be shared by the leader and the group. Criticism and praise are objectively given and a feeling of responsibility is developed within the group. Quality and productivity are generally high and new ideas and changes are always welcome. The leader tries to explain his decision to the group thereby ensuring the success of the group.

Skills needed for effective leadership
Studies have shown that leaders must possess some attributes to become successful in all respect. It is the presence of almost all the attributes in one leader that makes that person a wonderful leader with effectiveness and efficiency. A leader must be intelligent to be able to analyze problems or task and provide solutions to them within the shortest time. A leader should have administrative skill to manage resources to avoid redundancy or waste.

He should have expert opinion. A good leader should be able to endure, and have high tolerance for frustration. He should understand the problems of subordinates and help to provide solutions to them. In talking and in action, a good leader must tread with caution in order to portray a good image. He must be assertive and have human-relation skills. A good leader should also have inner motivation and achievement drive.

Trust and leadership
In the first place, trust is a positive expectation that another person will not- through words, actions, or decisions -act opportunistically. Opportunistically refers to the inherent risk and vulnerability in any trusting relationship. It comes to play when you make yourself vulnerable by either disclosing intimate information or relying on another's promise. So when I trust someone, I expect that the person will not take advantage of me.

Trust implies familiarity and risk. Trust dimensions are: integrity, competence, consistency, loyalty, and openness. When followers trust a leader, they are willing to be vulnerable to the leader's actions- confident that their rights and interests will not be abused. Trust is a primary attribute associated with leadership; and when this trust is broken, it can have serious adverse effects on a group's performance.

Effective leadership
For a good leader to emerge, certain actions and decisions have to come in from stakeholders. There is need to choose leaders based on merit. Look for a strong commitment to the organization from a leader. Always reward merit, but never let errors go unremarked. Remember that everyone in an organization could think differently. Show your organization who is in charge by being assertive not aggressive. Members should see their own potential within the organization.

There is no way one's relationship with one's children and spouse at home will not translate into the person's business activities. So if you are a good father and have the above qualities, you will equally be a good business leader and vice versa.

Privatization
The initial objectives is that as government institutions that have shown high level of inefficiency, when these institutions goes into private hands, they will be better managed and their level of efficiency could improve to a greater extent; the management of resources and services rendered will improve. But how the process is being handled today gives a lot of concern. Be that as it may, government is expected to provide enabling environment for the operation of these establishments. However, such institutions can be commercialized.

2011 Budget
Well, one of the ways to ensure accountability is that budget presentation should be timely so that the monies can be spread and expended on the projects they were budgeted for. If budget is presented very late, not only will it slow activities in the economy, it also means that the money that ought to be spent in 12 months will now be spent in less than three months , for instance. Terrible contracts will be awarded so that the billions of naira can be spent within the short time frame.

This will give room for high level of corruption. So the timely presentation of 2011 budget is a good development and that is why I have said that there is hope for the future. Things cannot remain the same. The due process aspect of awarding contracts today is a good idea compared with what obtained in the past. At least people can tender for contract even though there may be some loopholes here and there. More of such ideas as due process will still come some day.