IN THE NEXT 10 YEARS, THE LEGISLATURE WOULD BE MORE MATURE, SAYS MANZO 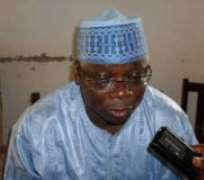 Senator Anthony George Manzo talked with Charles Akpeji in Taraba on the recent controversies that have trailed the federal lawmakers. Excerpts:

The situation is unfortunate. But this is the beauty of democracy. By my thinking, the CBN governor is important in regulating economic policy. In other markets, CBN governors or heads of federal reserves like in the U.S hardly make statements because the markets tends to be very sensitive and react nervously to comments made by somebody like the CBN governor. We think he should be talking less and do more in terms of getting the best use of our economy.

I think this is where people think there was a face-off. We are the parliament, and we are accountable to the people. The parliament is the arena and Nigerians are at liberty to show displeasures with us as they seem to have shown but we believe that as an arm of government, we have been working very hard. The legislature is the new boy in town, because anytime there is a military coup d'Ã©tat, the legislature is the one that suffers. In this case, we are about 10 years old and we are still in the process of building capacity. I think that 10 years down the road, we would be telling a different story. The legislature would have matured more and people would begin to see more output.

During the face-off, people called for part time federal lawmakers to cut cost…

It is wrong to ascribe to a part-time membership of a parliament because the constitution gives so much power to parliament and it is not the kind of work that can be done on a part time basis. Democracy is expensive, democracy is painstaking, and it is slow and laborious. I think Nigerians should give us a little bit more latitude to perfect the act of law making, the act of oversight of the executive.

Don't forget the federal budget was about N4.6 trillion and you are talking of a figure of N158 billion to the legislature. Nobody is talking about the fact that the states and the councils jointly share about half of the revenue of this country. And we know the very significant levels of lack of transparency in some states and councils. In the federal parliament, at least as far as we are concerned, we are monitoring the executive closely and we have been able to sometimes cut excesses there. For instance, the House of Representatives investigated the second runway project of the Nnamdi Azikiwe International Airport.

It is project billed to cost about N64 billion and when we raised alarm, the budget was reviewed drastically downward and we saved money. I think Nigerians don't have patience with parliament because we have been in military rule for such a long time that people like doing things by fiat. There are a lot of excesses at the Executive level. But this is an election time and the Peoples Democratic Party (PDP) is working hard to get another mandate. We are all in one big glass house and we should be careful how we throw stones around.

Does the Senate share the fears of many people that the theft of DDC machines at the airport has raised questions over the possibility of a free and fair election despite assurances from the chairman of the Independent National Electoral Commission (INEC) Prof. Attahiru Jega?

The Senate has done everything possible to make sure that Jega settles down on the job rapidly. The National Assembly has given to Jega all that he asked for and it is left for him and INEC to give Nigerians a free and fair election. The theft of the Direct Data Capturing machines is unfortunate. Luckily, Jega said it is not going to significantly affect the outcome of the voters' registration and conduct of the 2011 elections.

Do you foresee any crisis if either former vice president Atiku Abubakar or President Goodluck Jonathan should lose the PDP presidential ticket?

The PDP is not a party that is looking at itself in terms of North and South. Atiku happens to be from the northern part of the country, specifically North-East. President Goodluck Jonathan is from the South-South.

The debate in the PDP is that on the side, some people feel that as an individual, the president should contest because the constitution grants him the right and there is the consensus group who felt that the principle of zoning should be maintained. The court chose not to interfere. I think the PDP machinery is capable of bringing its house to order.  It is unthinkable to consider issues like the break up of the country. The president would work hard to maintain the unity and the integrity of this country.

I think investigations suggest that the weapons found recently were not destined for Nigeria. It is unthinkable for one to rig elections or to create violence with rocket launchers. If they were handguns like AK-47, we could have been alarmed. But what we all have been preaching is that we should discourage the culture of violence.

The issue of violence in Nigerian politics started not too long ago, unfortunately, I would say in the southern parts of the country particularly in the South-South areas. But the leaders there have been working to ensure that the culture of militancy, violence in politics is minimised. Democracy allows protest and disagreements; people are allowed to protest and those of us in elected offices should not be threatened or intimidated when people protest. It doesn't mean that they don't like us. We should be able to listen to them and find out why they are protesting.

The federal lawmakers finally expunged the controversial clause in the Electoral Act that would have made them members of the National Executive Committee (NEC) of their political parties.

I never supported that position, not because I don't like to be in NEC as a senator. In most countries, National Assembly members are in the highest decision making body of their parties. But I agree also with the counter argument that if you bring in about 87 members of the PDP as senators and 250 members of the House of Representatives to the NEC, it would be unmanageable.

My view is that we should accommodate as many federal lawmakers as possible in NEC so that in the executive of our party, we would have a voice from parliament. The party formulates the policy for government and it would be beautiful to have people that make laws to be part of the highest decision making body of their parties. It would be easier for them to defend whatever policy the party passes to the government for legislation.

Do you think that the Economic and Financial Crimes Commission (EFCC) has the powers to stop corrupt politicians from contesting for any elective position in the election?

I don't think so at all. But I think corrupt politicians should face a bigger court, which is the court of the people. Under the law, under the constitution, you are innocent until proven guilty. Many of those politicians that their names have appeared on EFCC list are facing charges and have not been convicted and the constitution does not allow us to do anything to them in terms of stopping them from contesting election.

But it is a moral issue here because when you are taken to court, it is the people of Nigeria that have taken you to court through the law process. The people are saying that you stole their money. I think if you have been alleged to have done something that is wrong, it is only morally right for you to take a step back and excused yourself from any electoral process until you clear your name. But certainly, the constitution makes it very clear that you are innocent until proven guilty.

As a former ambassador, what is your immediate reaction to the Wikileak reports, which some people believe are politically motivated?

I think the leaking of diplomatic cable is political and it is unfortunate. As an ambassador, I know that a diplomat normally writes reports about the country and certain individuals in the country he is posted to.

Nigerian diplomats have written reports about other countries just as the people have written about people in Nigeria. It is a normal thing for you to report to your home government. I think where the leakage becomes a problem is because it is unauthorised and it can easily threaten the national security of these countries because where you have the situation where the people are alleging that the United States or Britain say this about our leaders and so on, then it is capable of causing security challenges. But this is the beauty of democracy.

Again this is an issue that perhaps opponents of the Freedom of Information (FoI) Bill will say 'well, this is where we are because they can do that easily under wikileak.' The press is allowed assess to everything and all things. Those that are opposing the FoI Bill would have a ready tool to say 'look if you do that, sometimes it can lead to break down of law and order, but it is something that happens.'