WHY CAF SHOULD ACCEPT GALADIMA – NGEREM 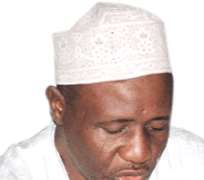 Alhaji Ibrahim Galadima
That Dr Amos Adamu has been suspended from the exalted FIFA Executive Committee, and indeed, all football-related activities over bribery allegations is not news any longer. That former chairman of Nigeria Football Association (NFA), Alhaji Ibrahim Galadima has been nominated to vie for Adamu's position in the CAF Executive Committee, is also no longer news.

What is, however, agitating the minds of Nigerians is the insinuation that CAF President and Adamu's long-time close ally, Issah Hayatou and some member nations of the continental soccer ruling body, are not favourably disposed to Galadima's candidacy for the vacant position. In fact, some countries have started positioning their candidates for Adamu's seat. Prominent among such candidates is South Africa's Danny Jordan.

Interestingly, the man in the eye of the storm, Adamu, recently took a swipe at the current board of the Nigeria Football Federation (NFF) for nominating Galadima as his replacement, when, according to him, the NFF was aware that he has appealed his suspension by FIFA. But one man that would not hear about any attempt to either question the choice of Galadima or jeopardise his chances of successfully taking the place of Adamu in CAF's Executive Committee, is sports aficionado, Dan Ngerem.

In a no-holds-barred exclusive interview with Daily Sunsports, the former president of Nigeria Athletics Federation dared CAF and indeed, the entire Africa to reject Galadima, and by extension, Nigeria, and risk losing Nigeria's massive financial support to the development of African football.

'I think we have reacted too much to Dr Amos Adamu's issue. The only regret is that so long as his appeal is still in progress, Nigeria's name would further be bastardised in the international media until that problem comes to an end,' Ngerem regretted.

'Going after the Sunday Times, or Issa Hayatou going after the BBC, an institution that is centuries old, is an uphill task. I can only wish them well. But they are not representing themselves, we must rise above personalising the issue of people having illusions of grandiose, be it Adamu, Ngerem, Galadima or Sani Lulu. It is about Nigeria,' he went on.

'Perhaps, it is time Nigeria called Adamu, sit him down and really analyse the situation critically and see whether there are merits in his appeal, because he was not representing himself at the world's football governing body. If Nigeria did not recommend him, he wouldn't have gone anywhere.

'I've served as the chairman of the Marketing Committee of the African Athletics, I've served as the vice chairman of the African Athletics Foundation, I did not nominate myself. It was the Nigerian federating unit that first put forward my name. You can't come from the air and occupy such an exalted position at that international level. Adamu went there because Galadima, as the then chairman of NFA, nominated him and the Nigerian government backed him.

'This time round, the current board of the NFF chaired by Alhaji Shehu Maigari, has nominated Galadima and the Nigerian government is supporting him. So, in essence, it is Nigeria that we are talking about. We should focus on Nigeria's public image and interest. People are saying that Africans may not support Galadima, but I am saying; that cannot be right because he who pays the piper, dictates the tune.

'I'd love to look at Issa Hayatou in the face and ask him what Cameroon, his country, has done for African football in the last 20 years? Has Cameroon hosted any CAF or FIFA-organised tournament? But in the last 20 years, Nigeria has spent billions of dollars to sustain African football and you're telling me that Nigeria puts up a name and you wouldn't support her candidate, shame on Nigeria! It means that we haven't played our politics well.

'It would be a reminiscent of what we did with ECOMOG, where we literally put our blood on the streets of Monrovia in Liberia and Sierra Leone and we asked for nothing in return. All these African countries are just using Nigeria as a 'ping-pong' board. It shouldn't be so. Perhaps, the Adamu-FIFA bribery saga will help us to redefine our foreign policy initiative.

'Why wouldn't anybody support a Nigerian candidate? Forget that it's Galadima; Nigeria has put forward a candidate. If indeed they don't support him, when next there is money to spend, then let Nigeria sit on the fence. Let Botswana, Mali, Ivory Coast or indeed, Cameroon, come up with the money because Hayatou is a quintessential example of what is not right.

'Perhaps, we need new blood in CAF; we need to regenerate ourselves and refresh African sports, particularly the engine room of football on the continent.

'Like I said earlier, Nigeria has borne the brunt and we recommended somebody and you said no? Kai! we'll wait for you on the other side. We should try and be like America. There're no free lunches. You don't spend money and people ridicule you in the process. Even last year, 2009, we spent $30billion on FIFA Under-17 World Cup, while Cameroon spent theirs on electricity, roads, school and health systems.

'I was part of the African contingent that went to see the president of the Republic of Benin sometime ago. I was there for a couple of days and their light was not interrupted for one second. So, while Nigeria is spending billions of dollars in the past two decades on African and world sports development without accounting for any kobo, Hayatou's Cameroon has not spent one kobo, yet the man is holding sway as CAF president for decades now. And you're telling me that Nigeria recommended somebody and they're rejecting the person. We'll wait for them at the other corner.

'But would Nigeria do that? Would we cut our nose to spite our face? Would we support our process and have patriotism at the back of our minds? We should stop being the pot of joke on the continental and international levels.

'We went for ECOMOG where so many of our young men and women were killed. I had a friend, a young doctor that was blown up on his first day in Monrovia. And then in football, we're spending billions of dollars and then we put forward a candidate and you don't elect him. If we can't play the politics, then the shame is on us. You must put your money where your mouth is or who among those nations has spent more money on the continent's development than Nigeria?

'Remove South Africa and the Maghreb region when you're discussing the politics of the continent, what remains is about 42 countries. That is the way CAF also manages the rights. When you're structuring broadcast rights, when Nigeria is â‚¬3million, South Africa can be â‚¬20million. The Maghreb region can be â‚¬15millon. Nigeria and the other African countries are just trying to make an impact. I'm talking about our own region.

'Isolate South Africa and Maghreb, let us play in our own territory, thereafter, we enter the arena for the other one. But a situation whereby we spend all the money and we're ridiculed upon should stop. Let's use the epicentre of the FIFA bribery imbroglio to redefine how we play international politics. The Galadima issue is a good example to test the waters whether Nigeria is serious or not, or whether we will continue to be the pot of joke. 'I tell you, they say Nigeria spends money like drunken sailor. My friends from Francophone countries would tell me, 'Dan, you know Nigeria has oil, but we have our brain.' I mean, people have looked me in the face and told me that. So, what does it portend?

'Only last year, 2009, for a secondary school competition, we blew N30billion. For a country that does not have any clear policy on school sports, we spent that amount of money. Issah Hayatou and his cronies came here and wished us well. What has Cameroon done in that regard? These are simple facts that are not hidden.

'I want to see all these issues about FIFA bribery scandal and Galadima's nomination as a blessing in disguise. Let us use it and do our homework. Let us use it to restructure and redefine our purpose, particularly, on international sport politics.'