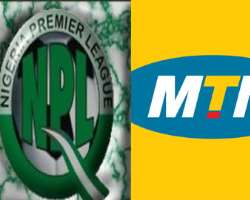 MTN takes over
Amidst poor handling of the bidding process, South African communication outfit, MTN has eventually breathed life into the Nigeria Premier League after winning  the bid as title sponsor of the Nigerian top flight domestic club competition.

This followed the N2.5 billion the company offered through its agent, Total Promotion. The offer is for a period of four years, and would take immediate effect although the season  is six weeks old.

According to the agreement reached between the communications outfit and the Nigeria Premier League, MTN will part with a princely sum of N550 million as take-off money. The sponsorship deal would appreciate by 10 per cent annually; an offer that was considered better than the N2 billion offered for four years by the former title sponsors, Globacom.

Joe Amene, the Financial Committee chairman of the Nigeria Premier League said yesterday at the opening of the bids that the NPL has no option than to accept the N550m offered by Total Promotion as against the N450m the former sponsors, Globacom Nigeria Limited was willing to pay annually.

Remarkably, Okon Inyanam of Globacom declined comments at the end of the exercise, but Niyi Alonge of Total Promotion that fronted for MTN at the bidding said adequate care would be taken of the Nigeria Premier League.

'Our organisation, has integrity to protect so also the MTN we represent. From now on the Nigeria Premier League would be better for its decision to accept our bid. This will bring total change in the league.

'NPL will not suffer; its like a new born baby to us that would not be allowed to suffer', Niyi Alonge said as he also promised that aside the N550m package that there are more incentives the NPL would derive from the partnership.

But the former title sponsor, Globacom is yet to sheath its sword as far as the battle to repossess the league is concerned. An inside source said, 'they can only try but they can't knock us out.

We're still in charge', the source said noting that the battle for the soul of the Nigerian League might be played in the law courts.