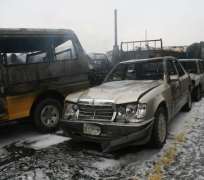 LAGOS, Dec 02, (THEWILL) - Another tragedy struck at the early hours of Thursday as no fewer than 30 persons lost their lives in a fatal road accident which occurred along Lagos-Badagry Expressway, precisely between Agboju and Alakija Bus Stops.

A police source told THEWILL that the accident occurred when the front part of a petrol tanker carrying 33,000 liters of PMS drove into a deep pothole and swerved off the road under circumstances yet to be ascertained.

According to Lagos State Police Command, the fuel from the tanker spilled onto the road causing the truck to eventually go up in flames with seven other vehicles.

A statement by the State Police Public Relation Officer (PPRO), Mr. Frank Mba confirmed that 5 persons got burnt to death to the extent that they could not be identified; 8 others suffered injuries of various degrees and were rushed to different hospitals.

According to him, three fire fighting trucks/vehicles from Lagos State Fire and Safety Service responded to the scene immediately to carry out rescue operations. Police officers from Festac and Satellite Towns Divisions quickly moved to the scene to arrest the situation.

Osayintolu, who briefed journalists, said the victims had been taken to the Lagos State University Teaching Hospital (LASUTH), saying the accidents involved at least five vehicles, which he said were completely burnt.

The general manager explained that most of the victims, who jumped out of their vehicles, sustained severe injuries.

He lamented about the activities of touts popularly called ‘area boys’ in the area, which he said hampered rescue operations. In his response, the State Director of fire and Safety Service Mr. Aderemi Ajose said the fire service men got an emergency call around 6.13am informing them of the incident adding that fire officers arrived the scene around 6.24 and were able to battle and put off the fire.