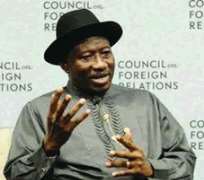 Jonathan
An Abuja High Court on Wednesday held that the constitution of the ruling Peoples Democratic Party (PDP) recognized the principle of zoning and rotation of party and elective public offices.

The court, however, declined to make a declaration that the North is entitled to bear the presidential ticket of the party for two consecutive terms on the grounds that the issue was 'a political question and therefore not justiciable.'

Besides, the court presided by the Chief Judge of the Federal Capital Territory (FCT), Abuja, Justice Lawal Gummi further declined to grant the request of an aggrieved PDP presidential aspirant to the effect that the party would be in breach of its constitution if it sponsors a southern presidential candidate when the North had not exhausted its two consecutive two terms.

In his judgment in the suit filed by a PDP presidential aspirant, Sani Aminu Dutsinma challenging the aspiration of President Goodluck Jonathan, Justice Gummi held that 'the PDP constitution does not in anywhere provide for such specific arrangements and no such breach has occurred.

'I hold that the provision of Article 7.2(c) of the PDP constitution as amended recognizes the principle of zoning and rotation of party and public elective offices. The said article is subsisting and biding on the party, its organs and members but I am unable to make declaration that the North is entitled to bear the presidential ticket of the PDP for two consecutive terms i.e. 2007 and 2011 respectively as the South did in 1999 and 2003 same being political question and therefore not justiciable'

Justice Gummi said a call upon the court to order PDP to sponsor a candidate from the North in the spirit of Article 7. 2 (c) was a clear political question which only the relevant organ of the party could decide either at its primaries or by a decision of any organ of the party empowered to so choose. He further held that the power to nominate and sponsor candidates for an election was vested in a political party and the exercise of this right was the domestic affair of the party.

Earlier in his ruling, Justice Gummi had dismissed PDP objection that the plaintiff had no locus standi to institute the action. He said from the documents filed in court 'it is in the view that paragraph five of the affidavit had been unsuccessful in discharging the evidential burden of proof that Dutsinma is not a member of PDP.' According to the judge, the plaintiff's membership card was endorsed by the chairman and secretary of Ward Dutsinma 'B' in Dutsinma Local Government Area of Katsina State.

He had also paid his due up to the first quarter of 2010 contrary to the submissions of the defendants that the plaintiff had not paid his due in the last two years. On the second arm of the objection that the plaintiff was not a presidential aspirant, the court said although he purchased his nomination form when the suit had been instituted, his expression of interest in the race was received by the party far back before the commencement of the action and the released of the party guidelines.

The court overruled the defendants that there were irregularities in the processes. It said it was too late to object having joined issues. The plaintiff had through originating summons filed on September 2, 2010 asked the court for three declarations and an order compelling PDP, its organs and members to respect and adhere to the provision of Art. 7.2(c) of the party by sponsoring a northern candidate for 20011 presidential election.

A similar suit filed by Cyriacus Njoku that was due for hearing before Justice Gummi was withdrawn yesterday by the plaintiff who said he was no longer interested in the matter .

It was not certain yesterday whether Alhaji Sani Dutsinma would appeal the judgment.