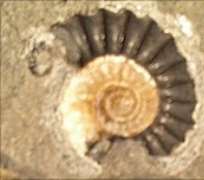 A new research paper published by the Geological Society suggests why many ammonites on the Jurassic Coast have “bite marks” in the same place.

Zoologist Chris Andrew and geologist Paddy Howe in Lyme Regis say that one in four of the fossils bears the mark, which is visible to the naked eye.

Their research supports similar findings from experts in Belgium.

The pair say the ammonites were eaten by a fellow cephalopod such as a soft-bodied squid.

These creatures had beaks which they could have used to break the ammonite shells, said Paddy Howe, one of the four authors of the report.

“It's got to be something that can grab the ammonite and manipulate it into the right position – certainly modern cephalopods are capable of this sort of behaviour,” he said.

“The modern Humboldt squid can be five or six feet (1.5 – 1.8m) in length, it can take chunks out of a wetsuit or a diver, so yes, it would be perfectly capable of biting through the relatively thin shell of an ammonite.”

Shell-dwelling ammonites, believed to be ancestors of modern cephalopods, became extinct towards the end of the Cretaceous period.

“Whatever killed the dinosaurs, it was probably the same factors,” said Mr Howe, who runs the Fossil Workshop in Lyme Regis along with Mr Andrew.

As for why the bite marks are so prevalent on the Jurassic Coast – it is simply a matter of numbers, said Paddy Howe.

“In any area where you have an abundant food source there are going to be predators there taking advantage of it.”

Another possible interpretation, that gas was responsible for the mark, was less likely, he said.

“The alternative is that there was a gas bubble,” he said.

“The strong sinuous bits that held the muscles to the shell could have been left in that canopy – but if that was the case you would expect to see crushed shell in the hole, and I've never seen that.”

The next challenge for fossil hunters is to actually find an ancient sea creature mid-meal, said Mr Edmonds.

“What would be fantastic with the bite marks would be to find a fossilised lobster or fish in the process of biting them,” he said.

“As long as people are allowed to continue to collect fossils, one day somebody will find that hopefully.”