SUPERCOMPUTERS ‘WILL FIT IN A SUGAR CUBE’, IBM SAYS 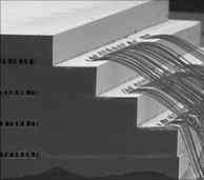 The prototype chip stacks are threaded with fine cooling layers

A pioneering research effort could shrink the world's most powerful supercomputer processors to the size of a sugar cube, IBM scientists say.

The approach will see many computer processors stacked on top of one another, cooling them with water flowing between each one.

The aim is to reduce computers' energy use, rather than just to shrink them.

Some 2% of the world's total energy is consumed by building and running computer equipment.

Dr Michel and his team have already built a prototype to demonstrate the water-cooling principle. Called Aquasar, it occupies a rack larger than a refrigerator.

IBM estimates that Aquasar is almost 50% more energy-efficient than the world's leading supercomputers.

“In the past, computers were dominated by hardware costs – 50 years ago you could hold one transistor and it cost a dollar, or a franc,” Dr Michel told BBC News.

Now when the sums are done, he said, the cost of a transistor works out to 1/100th of the price of printing a single letter on a page.

Now the cost of the building the next generation of supercomputers is not the problem, IBM says. The cost of running the machines is what concerns engineers.

“In the future, computers will be dominated by energy costs – to run a data centre will cost more than to build it,” said Dr Michel.

The overwhelming cause of those energy costs is in cooling, because computing power generates heat as a side product.

Cube route
“In the past, the Top 500 list (of fastest supercomputers worldwide) was the important one; computers were listed according to their performance.

“In the future, the 'Green 500′ will be the important list, where computers are listed according to their efficiency.”

Until recently, the supercomputer at the top of that list could do about 770 million computational operations at a cost of one watt of power.

The Aquasar prototype clocked up nearly half again as much, at 1.1 billion operations. Now the task is to shrink it.

“We currently have built this Aquasar system that's one rack full of processors. We plan that 10 to 15 years from now, we can collapse such a system in to one sugar cube – we're going to have a supercomputer in a sugar cube.”

Mark Stromberg, principal research analyst at Gartner, said that the approach was a promising one.

But he said that tackling the finer details of cooling – to remove heat from just the right parts of the chip stacks – would take significant effort.

Third dimension
It takes about 1,000 times more energy to move a data byte around than it does to do a computation with it once it arrives. What is more, the time taken to complete a computation is currently limited by how long it takes to do the moving.

Air cooling can go some way to removing this heat, which is why many desktop computers have fans inside. But a given volume of water can hold 4,000 times more waste heat than air.

The Aquasar system is made from green record-breaking Blade servers

However, it adds a great deal of bulk. With current technology, a standard chip – comprising a milligram of transistors – needs 1kg of equipment to cool it, according to Dr Michel.

Part of the solution he and his colleagues propose – and that the large Aquasar rack demonstrates – is water cooling based on a slimmed-down, more efficient circulation of water that borrows ideas from the human body's branched circulatory system.

However, the engineers are exploring the third dimension first.

They want to stack processors one on top of another, envisioning vast stacks, each separated by water cooling channels not much more than a hair's breadth in thickness.

Because distance between processors both slows down and heats up the computing process, moving chips closer together in this way tackles issues of speed, size, and running costs, all at once.

In an effort to prove the principle the team has built stacks four processors high. But Dr Michel concedes that much work is still to be done.

The major technical challenge will be to engineer the connections between the different chips, which must work as conductors and be waterproof.

“Clearly the use of 3D processes will be a major advancement in semiconductor technology and will allow the industry to maintain its course,” Gartner's Mark Stromberg told the BBC.

“But several challenges remain before this technology can be implemented – issues concerning thermal dissipation are among the most critical engineering challenges facing 3D semiconductor technology.”