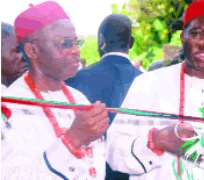 At ordinary times, the road leading to the Douglas House, the seat of Imo State Government, Owerri, is tranquil with the phalanx of trees lining it on both sides. But all through last week, the mood there was markedly different as the Ikedi Ohakim administration prepared to host Dr. Goodluck Jonathan for the first time in his capacity as president and commander-in-chief of armed forces. Residents and indeed, commercial taxi drivers plying that route suddenly realised that they had to go through extra security checks.

The reason for the high tension was not far-fetched. It is public knowledge that some political 'dissidents,' in Abuja, have been waging a running battle with Governor Ohakim. With the well-heralded two-day state visit now coming barely two weeks after the deadly bomb blasts near the Abuja Eagle Square, the security establishment was understandably, not ready to take chances.

Matters were not helped with the alarm raised on the eve of the visit by the state Commissioner for Police, Mr. Aloysius Okorie. Addressing a crowded press conference in Owerri, the COMPOL had alleged that the police had credible intelligence that some people were hell-bent on causing disharmony during the president's visit. He, however, re- assured the public that he and his men were on top of the situation.

In specific terms, Okorie disclosed that security had been beefed up in various locations in the state and would be on ground throughout the president's visit. The police kept their words. Right from the Sam Mbakwe Airport, through Mbaise town to Owerri city, there was heavy security presence.

Eventually, the Nigerian Air Force One landed at the Owerri airport Friday morning. President Jonathan, thereafter, alighted to the waiting arms of Governor Ohakim and his wife, Chioma. Also on hand to support the Imo governor were his brother governors from Anambra, Bayelsa, Akwa Ibom, Abia and Rivers states.

After a brief welcome ceremony at the VIP lounge of the airport, the president took off to Anambra on a whistle-stop visit to commission the new indigenous vehicle assembly plant, Innoson Ltd, and a couple of projects by the Peter Obi administration.

Thereafter, the president returned to Owerri to a far more rousing welcome.  It was hardly the time Jonathan would visit Imo, though. As vice president, he once stood in for President Umar Yar'Adua way back in November 2008 at the flag-off ceremony of IRROMA, a revolutionary public work initiative created by the Ohakim administration designed to open up rural Imo through an aggressive programme of road construction and rehabilitation.

This time, Jonathan had a bagful of projects to commission. These included a dual-carriageway in the city centre named after the late President Umar Yar'Adua, the Orji and Egbeada Water Scheme, Ngor Okpala-Umuneke-Ndashi-Etche road, the Osu-Ehime-Mbano road, the dualised Owerri-Orlu road.

Perhaps, the most symbolic of the projects commissioned by Jonathan was the new Governor's Office, which the Ohakim administrator started from the scratch two years ago and had promised to deliver before his first term expires, in line with his advocacy of 'New Face of Imo.' The imposing edifice is a visual delight, indeed. For most Imo citizens, it is surely a thing of joy that they, at least, now have a befitting edifice to point at as the office of their governor. In the last three and a half years, Ohakim had operated without an office. He had to make do with the small room at the Governor's Lodge, as office.

Also, the construction of the ultra-modern multi purpose hall, Imo Wonderlake Resort and Conference Centre at Oguta, was flagged off during the visit. Perhaps, the most audacious move by the governor was the decision to host a town hall meeting in Owerri in the presence of President Jonathan. A governor unsure of himself would not dare take such a risk, especially before the august visitor from Abuja. To observers, that showed the level of Ohakim's confidence in being able to tackle any question from any quarters on his handling of Imo affairs no matter how unpalatable.

Expectedly, the occasion offered Imo indigenes opportunities to freely ask questions and make suggestions on how to improve governance. Responding to a particular question on general insecurity, President Jonathan said the Federal Government would double its efforts to bring the mounting crime wave to the barest minimum.

Said he: 'We're totally committed to confront the security situation frontally. The security challenge crawled in gradually, as if it would not be too harmful and government failed to take frontal attack, as at that time until it became a cancer now that needs major surgical operation and probably a radio-therapy to cure it.'

He said no part of the country would be allowed to be a sanctuary for criminals, whether robbers or kidnappers. He said agencies of the government were working hard to strengthen the existing legal framework to confront the contemporary security challenges: Bombings, kidnappings are all terrorists actions that are now with us. 'So we need a very strong legislation. When I get to Abuja, I will meet with the leadership of the National Assembly to quickly conclude so that we can have a strong law to prosecute anybody arrested,' he promised.

In all, if the visitors from Abuja had expected to meet a cocktail of embarrassments in Owerri during their stay, based on negative profiling of the Ohakim administration by political opponents, the reverse was the case. Indeed, the turn-out at the state banquet held in honour of the visiting president could pass for the roll-call of who is who in Imo, as well as the cream of the intelligentsia in Igbo land. From the deputy Senate president, Chief Ike Ekweremadu, to the president of Ohaneze Ndigbo, Ambassador Ralph Uwechue. In fact, a prominent Imo politician was overheard telling a colleague in Igbo:  'Ochinawata (Ohakim's nickname) has done it again. What I have seen tonight is nothing but a carnival. He has put his enemies to shame again.'

The venue of the banquet itself was a spectacle to behold. It was clear the organising committee did not compromise on quality to give the president a befitting welcome. That Friday night, guests were hosted in a massive collapsible air-conditioned tent. As the cultural troupes gave a good account of themselves one after another, the cosy lightings gave the evening a truly golden ambience.

Resplendent in a blue native outfit and a red cap, the president enjoyed himself, judging by his beaming smiles as he and Ohakim engaged in side talks from time to time.

When the time came for him to make a remark, Jonathan could not hide his feelings. He expressed admiration at the spirit of fraternity among the Imo political leaders he said he had noticed since he arrived the state, just as he acknowledged that he was quite moved by the spontaneous show of love by the people and Ohakim wherever they went. The president, therefore, took the opportunity to debunk the speculations in some quarters that he was at war with Ohakim, urging the governor not to be bothered by whatever the side talks by a few political opponents.

Said he: ''Your fate must be dictated by people you are ruling, not by people in Abuja … as long as you are doing the right thing, no one can dictate whether you will win an election.' He assured the gathering that his administration was committed to ensuring a free and fair election in 2011.

Apparently, Jonathan's words were a response to a sentiment expressed earlier by Ohakim on the 'destructive activities' of a few disgruntled opponents based in Abuja whose specialty, according to him, was to peddle falsehood about the reality in the state.

Said the governor: 'Mr. President, I'm sure before you came to Owerri, you must been told lot of stories about Imo; that we are not doing anything; that the people are against us. I am sure Mr. President you have seen that none of that is true and that we are on the same page with you, as far as moving Nigeria forward is concerned. Imo is a peaceful and lovely state.'

While praising the developmental strides in Imo, President Jonathan pledged that his administration would continue to partner with every state who embarks on any development project, with a view to giving Nigerians the dividends of democracy.

Earlier in his opening address, Ohakim had thanked the president for finding time to come and inaugurate the numerous projects executed by the state government. With a ring of pride, Ohakim announced to the president that his administration had recorded a feat with the completion of a road that criss-crosses 19 communities in the state and linked Imo and Rivers State Airport.

At the end of that wonderful night, the vote of thanks was rendered by an elder statesman and frontline politician in the state, Chief Emmanuel Iwuanyanwu, who thanked the president for the honour he had done the state with his visit. He particularly thanked God for the gift of Mr. President to Nigeria at this point in the nation's life, and the Igbo especially. He stressed that Imo PDP has been peaceful under the leadership of Governor Ohakim, who, according to him, has equally achieved a lot in the past three and half years.