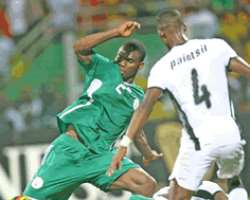 Yobo in action
Guinea yesterday made good of her early opportunity to pip Nigeria 1-0 in the Nations Cup qualifier at the 28 September Stadium in Conakry. The Guinean team is comfortably leading the group with 6 points, having won her first match 4-1 against Ethiopia in the series. Nigeria remains with just 3 points in the second position ahead of Ethiopia who also recorded a 1-0 victory over Madagascar.

Ethiopia now shares the same points with Nigeria. The Eagles are billed to take on Ethiopia in Abuja in their next game in March next year, while Guinea will travel to Madagascar.

The loss capped a week of drama for the Nigerians who were banned earlier in the week by FIFA on issues pertaining to government's interference in the affairs of the Nigerian Football Association (NFA). After a long and eventful week for Nigerian football, the away match to Guinea finally arrived and the Eagles were able to get on with the AFCON qualifiers.

The match seemed impossible a few days ago when FIFA suspended the Nigeria because of government's interference in football affairs, but the ban was provisionally lifted on Thursday and CAF agreed that the qualifier should go ahead undisturbed. Nigeria came into the match off the back of a win against Madagascar, while Guinea got the better of Ethiopia in the previous match, so both had wins under their belts from the first round of fixtures.

Home advantage was the key for Guinea on the day, with fans attempting to destabilize Nigeria. Michael Eneramo missed an opportunity to equalise for the Nigeria 11 minutes to the end of the 1st half. Regrettably, the Esperance striker left with only the goalkeeper to beat shot wide.

It was to be the best chance created by the Super Eagles in the match that saw them missing a trio of their star players. Chelsea's John Mikel Obi, Peter Odemwinigie of West Brom and Dickson Etuhu of Fulham had all dropped out, owing to injuries.Valencia's Sunny Stephen, who made his debut in the green and white, partnered Yusuf Ayila in the midfield, while Obinna Nsofor and Kalu Uche played on the outside. Obafemi Martins and Eneramo led the attack but could not find the net to get Nigerians back into the game.The introduction of John Owoeri and Ahmed Musa in the second half brought some life into the Nigerian attack but her resolve could not break the Guinean defence who played in front of a partisan home crowd that chanted and supported them all through.Obafemi Martins had a shot on goal tipped over the bar by the Guinean goalkeeper as the Nigerians tried in vain to get the score even in the dying minutes.

Egypt came to Niamey to blot out memories of her unglamorous outing in her first group match, when Sierra Leone held her to a shocking 1-1 draw at the magnificent Cairo Stadium watched by thousands of faithful fans.

To confirm their status as reigning and record seven-time continental champions, the Pharaohs needed to demonstrate more than a mere win against the Mena of Niger, considered by many pundits as an unreliable barometer of determining the actual form of the north African team rated number nine by FIFA.

But Niger was not an easy side to handle at home, thanks to her aggressive defence and the country's unkind and hot weather which most visiting teams find difficult to endure.

The 35,000-seater Stade GÃˆnÃˆral Seyni KountchÃˆ was appropriately jam-packed by local fans, who had found their way in since early morning.

The clash went underway with Niger seemingly undaunted against the Pharaohs, dictating their play under the blazing weather, which hampered the agility of the visitors.

Twenty-two-year-old CSKA Moscow striker, on loan at Bordeaux, Moussa Maazou shot Niger into the lead in the 7th minute after a swift combination from the home side which easily disorientated the Egyptian back-line.

Egypt were now under even more pressure to overturn the situation in their favour. Niger, now loose from their constraints, poured forth with not only the intention to preserve their lead butâ€  possibly increase it and knock the reigning champions out.

The battle settled in the midfield, as the Egyptians strived to lift the hostsÃ­ siege, hoping to obtain an equaliser with time ticking away. But the Mena boys typically crowded out the Egyptian attack time and time again. The first-half petered out in that fashion.

The second half began with intense pressure from the north Africans, probably fired up by coach Shehata during the break, but most of their efforts were aborted by a Ã«never say dieÃ­ Niger formation, well compact and stamping out every attempt from the Pharaohs, even before it could yield.

With a few minutes remaining, the visitors, seemingly exhausted due to the extreme hot weather and demoralised by not finding an equaliser, began to get frustrated and mistakes crept into their play.

Shouts from the touchline by their coach could not rectify the damage that had already sunk in.

Maazou's lone goal had determined the fate of this encounter, which most pundits tipped would be EgyptÃ­s.

At the final whistle, the Mena were holding their slim but historic victory against reigning African champions Egypt, who would increase their list of critics with another poor outing.