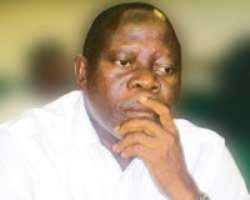 AS Nigerians marked the 50th independence anniversary of the nation yesterday, Edo State Governor, Adams Oshiomhole and his Imo State counterpart, Ikedi Ohakim urged leaders and other stakeholders to think of how to make the country great.

In his message in Owerri, Ohakim said Nigerians should not concentrate on the disappointment of the nation in order not to bring the country backwards.

'Let us remember that the promise of tomorrow is greater than the disappointments of the past. The future of our country and the hopes of the coming generation are in our hands,' he said.

Ohakim urged both Imo people and Nigerians by extension to reflect on the things that will give real issues of the golden jubilee.

'Dear brothers and sisters, let us work for it. At 50, your greatness is assured under God. For as always, Nigeria is in the hands of God,' he added.

Oshiomhole urged leaders to reposition the country for greater performance and address poverty, which he said was alarming. 'The evidence of leadership failures in the economic sphere is sobering indeed. In spite of abundance of oil deposits, Nigeria now imports petroleum products for domestic use. Our energy crisis remains a national embarrassment. Despite the vast incomes from oil, there is little to show in the welfare of the people. Poverty levels have risen across the country from about 30 per cent in the 1960s to 70 percent. Our people have been abandoned to their fate by a State that is unable to intervene constructively in our lives,' he said.

Speaking at a ceremony to mark Nigeria's 50 years of independence yesterday, Oshiomhole said military intervention in Nigeria's politics despite their publicized positive intentions also helped to erode democratic values in the country.

He lamented the exclusion of the pioneer labour leader in the country, Pa Michael Imoudu from the list of 50 persons shortlisted to be honoured by the Federal Government.

He said the labour movement, students and the press must not be ignored in writing the history of Nigeria's struggle for self-rule. 'It is fitting to recall the heroic sacrifices, struggles and contributions that our people invested in the struggle for independence. The struggle against colonialism and its attendant injustices produced such outstanding leaders like Chief Anthony Enahoro and Comrade Michael Imoudu.

'However, the real heroes are the people of Nigeria, who demonstrated great resilience, common resolve, courage and capacity for sacrifice. We must remember and celebrate the sacrifices of Nigerian women, some of whom were killed by colonial forces in Aba. We remember the valiant struggles of Nigerian workers across the country, who terrorised the colonial order. Our working people shed their blood in such incidents as the Iva Valley massacre. We remember the heroism of Great Nigerian students, who became foot-soldiers in the Independence struggle. We recall with pride the courage and consistency of the Nigerian press and other segments of the Nigerian people.'

While commending President Goodluck Jonathan for appointing a credible leadership for the Independent National Electoral Commission (INEC), Oshiomhole said Nigeria's democracy could only grow if the leaders of the country 'are actually elected by the people,' adding that the existing set of Nigerians in power had assumed postures that reflected the consent of the people.

'The struggle for independence was not inspired by the mere quest to replace a White colonial order, but we were driven by a quest to build our own nation based on the ideals of social justice, opportunity for all and the dignity of labour. Therefore, we have today a new colonial order, as many of our leaders merely imposed themselves against the will of our people.'

'I wish to acknowledge the good judgement of Mr. President in recognising some outstanding Nigerians in the struggle for independence. However, the omission of Labour Leader Number 1 and a foremost nationalist, Comrade Michael Imoudu, from the Presidential Honours list is unacceptable. Indeed, his omission amounts to a denigration of the contributions of the Labour Movement as the main productive force and political as well as the undeniable contributions of Comrade Imoudu. This patent bias in the composition of the Presidential Honours List is a sad commentary about the mindset of Nigeria's elite. We have noted that even Mr. President acknowledged some genuine complaints over the Honours List. Comrade Imoudu's case has merits that cannot be ignored. Therefore, we urge Mr. President to remedy Comrade Imoudu's omission before the conclusion of the 50th anniversary celebrations.'