This is the best moment of my life, says Chidinma 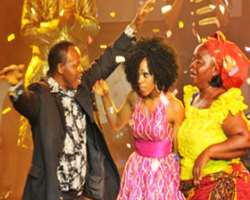 IT was an exciting moment at the Ultima Studios, located at Bamako Road Isheri, Ojodu, Lagos, at the weekend, as the last phase of the MTN Project Fame West Africa Season Three ended on a colourful note.

After 10 weeks of rigorous training, intense and breath-taking performances, interspersed with suspense, Chidinma Ekile, a Nigerian has won the highly competitive MTN Project Fame West Africa. Against all odds, Chidinma, showcased courage, determination, focus and creativity, won the star prize of a brand new Toyota RAV4, and N2.5 million, as well as a one year recording contract.

Before the commencement of the event, the large crowd that thronged the studio were treated to rib-cracking jokes from stand-up comedians such as Seyi Law, Akapela, and Pencil. They kept the guests laughing all through. Their jokes were punchy and thought-provoking, and got the audience reeling with laughter. When the event finally began, the remaining six contestants did a team song titled I am a Winner, which was produced by award-winning producer and songwriter Cobmas Asuquo. One after the other, they sang their lines. The six finalists demonstrated their individual skills in their delivery.

When it was the turn for the six youngsters to perform their original composition, the contestant named Ochuko Ogbu-Sifo, stepped out first to a number titled, Get Up. His rendition got the audience dancing and clapping. He had a good outing. Next was the Ghanian, Kesse Frimpong as he performed Chidinma, his song had some dramatic presentation, as he did it with his co-contestant Eyo Eminue, who handled the rap aspect of the number, while Chidinma which the song is directed to sat at one edge watching as the drama unfolded.

Yetunde Orijah (a.k.a. Omo Ibadan) was the next contestant, she did a love song in Yoruba Language titled Akingbolahan. The song had some emotional tune, and the audience responded to her presentation by clapping after her number. The petite singer, Chidinma, who stole the night was next. Upon her announcement by Adaora and Joseph, the hall erupted with jubilation. Carefully, she did justice to the number Dedication. The inspirational song was soulful and touching. Her rendition gripped the whole audience as almost everybody responded to her performance with spontaneous movements of their body in excitement. Given her size one would be amazed that such an awesome song could come from her. After her presentation, she got a standing ovation from the crowd.

Next in the row was Tolu Adeshina as he did a song titled Arewa. He also gave good account of himself. He presented the song to the admiration of all. The last contestant was Eyo. His smooth presentation of the song What is her Name was a delight. Eyo had an impressive performance.

In all, the six contestants put up good display of showmanship. Though their faith lay in the hands of those that voted. And before the announcement of the winner, Dr. Sid took to the stage to perform his hit songs Something About You. His other presentation Pump Champagne got everyone dancing. When the time finally came, Joseph and Adora told the six contestants to line up as they waited for the final moment everybody has been waiting for. The comperes delayed the announcement, getting the contestants in palpable suspense. They blinking rapidly, breathing in and out almost every minute, barely able to subdue the tensions. The audience was quiet for few minutes as the validated voting result, enclosed in an envelope was handed over to Joseph. In the end, Chidinma was declared the winner in the 2010 edition of MTN Project Fame West Africa. With announcement, the whole hall went up in wild jubilation; some danced while others shed tears of joy for her.

Chidinma is the first lady to win the musical talent hunt reality show.

Presenting the prizes to the contestants, Corporate Service Executive, MTN Nigeria, Mr. Wale Goodluck congratulated the contestants for emerging winners of the show and advised them to make the best of the opportunity provided them by the telecommunication company. “MTN Nigeria is committed to creating opportunities for Nigerians and the Project Fame West Africa is just another platform for such opportunities. As another set of young individuals have been empowered, we advise them to make good use of this wonderful opportunities and grow to become global stars,” he said.

Chidinma whose excitement knew no bounds after being declared the winner of the show, expressed delight for being the eventual winner. She said winning the show is the greatest thing that has happened to her. “I cannot believe it,” she enthused.

Chidinma is however full of thanks to MTN Nigeria, sponsor of the show, for giving her the platform to achieve her dreams of being a music star. Her words: “I am so grateful to God Almighty and to MTN Nigeria for providing me this platform. This is the best moment of my life and a turning point too. All thanks to MTN for providing this turning point.”