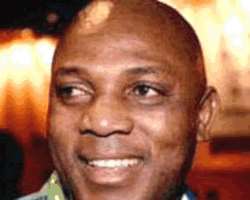 Speaking with Daily Sunsports from his base in the United States of America on phone, Keshi, who confirmed submitting his application and CV to the NFA last week, said that he had the Midas touch to turn around the fortunes of the Super Eagles that had remained static for years now.

'I have what it takes to transform the Eagles that is why I have applied for the job and I hope I get it soon. What I have done for order countries, I want to do for my country. Nigeria unlike these other countries have better talented footballers and I believe what they require from me is the managerial expertise to forge ahead.

'The last time the Eagles won the Nations Cup was in 1994 in Tunisia and that was my last year as a player of the national team. I want to win the Nations Cup again as a coach and I believe we have the players who can win the next African Nations Cup if properly blended.

'I have never been in charge of the Super Eagles since I started coaching, the only stint I had with the senior national team was as an assistant to Bonfere Jo and later Amodu Shaibu. I want Nigerians to give me a chance and see if I would not deliver. I have strong conviction that the Eagles will not only win the Nations Cup, but qualify for the World Cup and reach the semi finals.

'People say that my tenure as coach of Mali national team was bad and my response had always been that whatever happened in Mali was caused by the Malians themselves, who worked against the success of their team. Take the best coach in the world to Mali and I tell you that he cannot do better than I did. It was not easy managing players and trying to manage the football association who hardly agree among themselves.

'Of course, I qualified them to the Nations Cup in Angola and we lost because the members of the association wanted to force players on me and when I refused, some the players revolted by playing below expectation. It was hell managing Mali. Togo was much better because I was dealing directly with the President of that country, who gave me all the support I needed to succeed.

' I lost out of taking the Togolese national team to the World Cup in Germany after I had qualified them because all those who felt angered by my direct dealing with their president ganged up against me, blackmailed me with the connivance of a couple of their players and got me booted out. I want to give back to my country what I had gained as a player in and outside the country,' he stated.