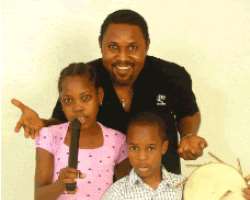 He suddenly stopped the interview midway and refused to answer any further question regarding his new marriage and his relationship with estranged wife, Fathia. He said he had made up his mind never to reveal the identity of his new wife to anyone.

Since trouble started rocking his relationship shortly before his involvement in a ghastly autocrash, Kwara State-born actor, Saheed Balogun, has recorded a number of woeful experiences. But today he feels the experiences were destined by fate.

Few months ago, some journalists came into town from Europe on a mission to interview Balogun. During the interview, the journalists came to the sensitive issue of his new spouse and why he jettisoned Fathia. Balogun declined utterly by telling the Irish pressmen that the question they'd asked was a no-go-area.

The Nollywood star, who takes pride in being called 'Mr. James Bond', says he believes life has taught him some great lessons and he needs to exercise more caution in answering such sensitive questions.

Balogun also hinted why he had to travel to faraway London to pick a lady of his choice despite the numerous ladies dying for him back home in Nigeria. Although, he regretted why his marriage to Fathia failed, he nevertheless explained reasons he and Fathia will never reconcile.

Sometime ago, some eminent Nigerians rose to mediate on Saheed and Fathia's marital crisis. Balogun had sensationally opened a can of worms on what led to the break-up and atrocities committed by Fathia, among others. In fact, former governor of Lagos State, Asiwaju Bola Tinubu reportedly made a quick retreat when details of the messy break-up reached him.

Despite the furore his divorce generated, Balogun said it still made sense to him to marry a London-based girl without minding the long distance. The actor also gave account of his new wife, Omoyeh Eyisojeh, whom he describes as beautiful and soft spoken.

Balogun went on to share his experience about his female colleagues in the movie industry. He said he would rather advise men to keep their wives out of public glare. According to Balogun, it is the exposure and contacts actresses get that lure them into immorality which ultimately endangers their relationships. In deed, he regretted his mistake of introducing Fathia into show business and listed this as one of the reasons his marriage crumbled.

His words: “I would never again in my life allow my wife come into showbiz or near the press. If she goes against me, that would mark an end to that relationship, I am against show-womanship.”

On hopes of a reunion with Fathia, Mr. James Bond said: “The 'F' letter name is not in my life anymore. It's as if I never knew anybody that bears that name. I have remarried. So, forget about Fathia.” As he reclines on his seat, it's so glaring that the musician-turned actor is more satisfied with the relationship with his heartthrob whom he proudly calls 'Omoh'.

Here, like never before, Balogun opens up to “Star force's” Yemi Omidiji on his crashed marriage. He also talks on how he succeeded in wooing Omoh, his new queen. Excerpts:

Why I divorced Fathia
I do not see Fathia as an enemy at all. But I have come to realize that we are two different people. But we cannot come together nor have anything to do together. The children are the link point between us. Two live wires can never come together. If we do, there shall be chaos. I love my life. I also still love her. The truth of the matter is that I still sincerely pray for her in my closet. I don't have anything against her.

But I did not know God was indirectly telling me her time under my roof has expired. She has chosen to pack out of my house on seven good occasions. In Yoruba culture into which I was born, if a wife should move out from her husband's house for seven times it means a lot; her final tenure has elapsed in that house. It is a perfect divorce. I don't want to complicate issues at this stage but do you know that no matter the situation, one need to respect elders. I still somehow regret the way she shunned former Governor Tinubu and his wife, Aunty Remi. She had the guts to cut the phone on Aunty Remi when they tried to intervene. Imagine that!

We have free access to our children
We have not separated in terms of sharing our children as reported. Truly, I have three children; two of them were delivered by Fathia. Zainab is the oldest. Fathia's children are Khalid and Alliyah who both formerly schooled and lived abroad. Khalid was in Dublin and the other (Alliyah) who is the youngest was in England. The two of us take care of the two children equally. We have free access to them. And we have not shared our children as some magazines reported.

I've learnt my lessons
When I had an autocrash in 2006, I almost died. The message that kept ringing in my ear was, 'you're too carefree with women.' By the time I woke up two days later at the University College Teaching Hospital (UCH), Ibadan, I became more afraid of women and at the same time, I appreciated them even more. I believe part of what caused my ruined marriage was because I exposed my wife too much to people. And I don't want this to repeat itself. I detest showomanship. I have learnt my lessons.

Omoh, my angel
Omoh hails from Esan in Edo State. She was born to Pa and Madam S. Eyisojeh.
She is a fashion freak, God-fearing and a Christian. She does her things silently. She is in her 30s. She is fourth in a family of eight. Her three senior sisters are Elizabeth, Mary, and Edna. Her other younger siblings, Hope, Obel, Alex and Kelley are all based in the West. Among the many lady friends I have considered, she was the only one that stood out. I have friends from all parts of the world. If I had married Omoh in my early years I wouldn't have had problems and the ordeals I went through. She was single the time I approached her. Though, it took me great time before she accepted my offer. I had lady friends who might have thought within them that they were Mrs. Wright. I had so many girl-friends, but incidentally, I did not feel them.

I prayed fervently before God told me she was my Mrs. Right. I did not waste time; I have performed every marriage rite required by her parents. So, we are legally married now. I prefer her staying in England. I advised her people to let her stay there for now for reasons I best understand. They too can understand better. When the time comes she would relocate to Nigeria or I may relocate to London. Interestingly, I fell in love again with a woman from Edo State, a land I had turned my back on after Fathia, who is from that state disappointed me. I was so glad to learn that nice people inhabit Edo State.

What I told Omoh
I have warned Omoh that wherever I see her face in the media, it means she wants to tread the path her predecessor trod and it may cause our separation. That is that for now. And I know her for one thing; she would keep to my instruction.

My role model
My model is G-O-D, God. But I have a god-mother. She is Oluremi Adikwu Bakare. The woman is among those I have to appreciate. I want to thank her for the financial and moral support she accorded me especially at the height of my turbulence.

Advice to artistes
I want other actors to learn from my experience. I won't discourage any artiste from marrying someone in the same show business. But they, most especially, men should try as much as possible to be more careful in their dealings.

Khalid: I hate acting
I think I'm old enough to see for myself. Let me tell you, I can't tread the line (acting profession) of my dad. I hate the N30,000 salary thing called acting. I want to become a wealthy, big boy. His monthly gross of N30, 000 or N40, 000 can't sustain me when I finally grow up. Though, each time he heard me say it, it annoys him. But that is the truth.

Zainab: I want to be an actress
My mum and dad did not quarrel; they still love each other as before. We, the children also love one another. Though, daddy gives us free hand, I have always told Khalid to have a second thought as a way of supporting him. I have promised my dad that I will be an actress. He agreed to support me.