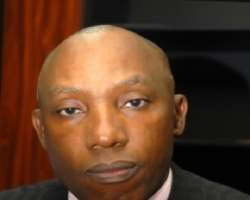 
ABUJA, Sept 19, (THEWILL) - The Group Managing Director of the Nigerian National Petroleum Corporation, NNPC, Mr. Austen Oniwon, has called on members of the National Union of Petroleum and Natural Gas Workers, NUPENG, to work hard to sustain the current steady supply of petroleum products across the country.

Oniwon made this call while delivering a keynote address at the 2nd Quadrennial Delegates’ Conference of NNPC NUPENG Group Executive Council, GEC, which held at Agura Hotel, Abuja.

Oniwon who explained that he has been receiving commendations from all quarters for the current steady fuel supply of petroleum products to every nook and cranny of the country said he refused to take the glory for the achievement alone as it was made possible by the support of members of the union.

He charged them to ensure that the current supply stability is sustained, adding that the surest way to achieve that is to get the refineries to run at optimum capacity.

"For us to sustain the current steady product supply, the refineries must work to reduce our recourse to importation. The Kaduna and Port Harcourt refineries are back on stream and we are currently supplying 30% of the products in the country. We want to get to a point where we can proudly say NNPC supplies 100% of petroleum products consumed in the country, and with your support, I know we can achieve it," he said.

Justifying his plan to have NNPC control the downstream sector, the GMD said since Nigerians judge the corporation’s efficiency by the availability of petroleum products, it makes business sense for the Corporation to aim to have a controlling share of the market, adding that the ambition does not mean that NNPC wants to drive anyone from the market.

He also called on the union to support the NNPC Transformation project, saying: "One of our primary responsibilities is to transform NNPC and the oil and gas industry. We intend to re-prioritize the transformation program and drive it to an irreversible point. We can’t achieve this without your support."

The NNPC helmsman noted that the theme of the conference, "Re-awakening the Oil and Gas Sector: Creating New and Gaining Lost Opportunities", was very appropriate for this period of reforms in the sector and urged members of NUPENG to become drivers of the change.

He said the process of transforming NNPC into a major player in the upstream has begun with the recent acquisition of 50% stake in three major Oil Mining Leases by the Nigerian Petroleum Development Company (NPDC) which have the capacity to increase the corporation’s production by 180 thousand barrels per day. He named the newly acquired oil fields to include OMLs 4, 38, and 41, adding that with this development, NPDC was well on its way to meeting the target of increasing its crude oil production to 100 thousand barrels per day before the end of the year.

Oniwon also called on members of the union to expose any form of corruption in the system and to support him in his drive to reduce the Corporation’s cost of doing business which he described as "too high."

Also speaking at the occasion, the Group Executive Director, Corporate Services, Engr. Faithful Abbiyesuku, urged members of the union to re-examine their strategies as that was the only way to regain lost opportunities in the oil and gas industry.

The National President of NUPENG, Comrade Igwe Achese, in his opening remarks commended the GMD for his efforts in re-streaming the Kaduna and Warri refineries.

He called on the Federal Government to fund NNPC well to enable it rise up to such challenges as pipeline vandalism and retooling of obsolete facilities.

The National President of PENGASSAN, Comrade Babatunde Oguns, on his part commended the management of NNPC for its commitment to staff training and the empowerment of union leaders.

On the Petroleum Industry Bill (PIB), he said the labour unions were not opposed to it and that they only want to be carried along by making a blueprint of its implementation available to them.