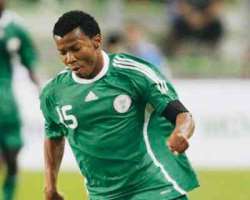 Ike Uche
Kalu Uche resumed training on Wednesday with the rest of the Almeria squad in the annex of the Mediterranean Games Stadium ahead of their Saturday's clash with Espanyol in the Spanish league.

The squad had a rest day on Tuesday after the 2-2 draw with Real Sociedad on Monday. But Kalu Uche, who Almeria believe is short on match fitness, trained in the gym.

It was not clear if the versatile Super Eagles player would be considered for a role in the encounter.

Two training sessions on Thursday and Friday had been scheduled before the squad leaves for Barcelona.

Meanwhile, Nigeria midfielder David Abwo says he is not satisfied with himself, and the performance of his team so far in the Hungarian league.

Abwo is the top scorer for his Hungarian Division One side Lombard-PÃ¡pa TFC with two goals in five matches, and is rated one of the best players in the league.

'In the first five matches, too many mistakes committed.For example, in the game against KaposvÃ¡r, and we also had bad luck. We have no choice than to train harder, play as a team. I am also not satisfied with my performance. I should be able to score more goals for the team,' Abwo said.

Out of 16 teams in the division, Lombard-PÃ¡pa are flirting with relegation, as they are placed 13th in the standings.