ICC SET TO BRING IN TEST LEAGUE AND PLAY-OFF 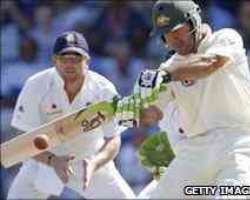 A Test league and play-off system intended to make all matches more competitive has moved a step closer.

Results will be fed into an official table to determine the top four teams, who will then go head-to-head to provide an official Test champion.

The development come in the form of six recommendations to be delivered to the International Cricket Council board from its chief executives' committee.

The ICC board is expected to rubber-stamp the plans in due course.

- The play-off should be held once every four years to determine the Test champion team with a request to hold the first such play-off in 2013 606: DEBATE

- That the ICC Board should consider a 10-team format for the ICC's flagship event, the ICC Cricket World Cup, from 2015

- That the ICC Board should consider a 16-team format for the men's ICC World Twenty20 from 2012, with the women's event continuing to run alongside

ICC Chief Executive Haroon Lorgat said: “Restructuring international cricket is a significant strategic challenge and one that must be dealt with.

“Achieving balance and unanimous agreement is not easy but it is a very important piece of work that requires a strategic response.

“We now have the potential to follow international cricket that is even more exciting.”