NIGERIANS WILL KILL US IN CAF LEAGUE â€“ KALU 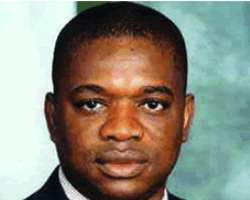 Kalu
Those who do not know history are forever condemned to repeat it.These were the exact words of Pillar of Sports, Dr. Orji U zor Kalu, as he bemoaned the fate of Heartland of Owerri who lost to Ismaili Egypt in the CAF Champions League, courtesy of a goal by a Nigerian, Godwin Ndubuisi Eze, last weekend.

Kalu wondered why the NFA does not have a record department that should always remind clubsides of the threat posed by compatriots playing for foreign clubs in the elite league.

He said: “It has become a huge problem. Rashidi Yekini blazed the trail in 1990 when Africa Sports of Cote d'Ivoire promised him money to score against Iwuanyanwu Nationale.

He scored in both legs, Seguela and Benin City. Twelve years later ,Enyimba's debut was killed by Soga Sambo of ASEC Abidjan in Calabar. More trouble came for the Aba team in 2004 when Emeka Okpara scored for Tunisia's Etoile in Enyimba's first international draw at home.

To cap it all,Taofeek Oyasipe's strike for Africa Sport same year made sure the People's Elephants lost in Aba for the first time in a CAF match.” The sports guru pointed out that the same Eze had scored against Nassarawa United, while playing for Al-Hilal of Sudan in 2007.

“Yes , his goal helped oust Nassarawa,so he is not a stranger. It was same way Emmanuel Iniobong Umoh, who dazed Enyimba in 2006, while playing for ASEC, and Onyekachi Okonkwo's effort lifted Orlando Pirates over his former team also in 2006. Even in 2008, Junior Osagie scored for his Tunisian team, Club Africaine, against Enyimba in Aba. And Yusuf Mohammed followed suit alongside Ifeanyi Onuigbo playing for Al- Hilal,” Kalu added.

He warned that Eze would still pose a threat against the Naze Millionaires if the Samson Siasia-led coaching crew did not give him the “Policeman” Nnamdi Anyafo treatmen in the Owerri return leg.