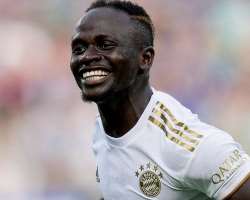 Bayern Munich forward Sadio Mane returned to training on Tuesdayas he continues his recovery from a leg injury which forced him out of the World Cup.

In a video on the club's Twitter page, Mane appeared on the snow-covered pitch at Munich's Saebener Strasse training ground, saying: "Hey, it's a good feeling, after a long holiday, to be back."

The 30-year-old injured his right leg during Bayern's 6-1 home win against Werder Bremen on November 8 and underwent surgery, which kept him out of Senegal's World Cup campaign.

Bayern coach Julian Nagelsmann had in early January said that the Senegalese forward could be in contention for a return for the second leg of their Champions League last-16 clash against Paris Saint-Germain on March 8.

"If everything goes really well, he may be able to play again against Parissmall chance he plays the first leg," Nagelsmannsaid.