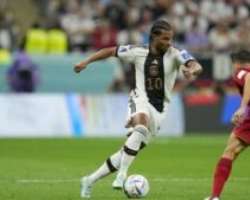 Niclas Füllkrug had only been a Germany international for 12 days and as recently as last season he was not even a top-flight player, but as a great football nation sought some kind of saviour, the time had finally arrived for this 29-year-old striker.

The second goal of his international career was the equaliser that saved Germany – for now at least. This team is a long way from the great German teams of the past and a second consecutive group-stage elimination would be this habitually successful country's worst World Cup period. It might yet happen but for now they have a chance.

On the occasion of Füllkrug's third cap he played like a man who may never win another – and that may yet be the case. A different story for the talented young Jamal Musiala, whose final touch it was that put the ball in Füllkrug's path on 83 minutes. The 19-year-old is the brightest young talent in the Germany team and he might yet be its brightest full stop.

The Stuttgart-born, southwest London-raised former England youth international was one of those entrusted by Hansi Flick to carry the fight in the final stages after an evening of chasing Spain's passes. When it came down to those crucial last minutes, Flick substituted his great midfielder İlkay Gündoğan as well as Thomas Müller. In their place came Leroy Sané and Füllkrug and they gathered the momentum to get the equaliser.

Two straight group-stage defeats would have put Germany on the path to elimination, and crushed the general sense of purpose. For now they are still alive in Group E where all four teams go into Thursday's last round of games in contention to qualify. Germany will have to beat Costa Rica to have any chance of the second round and also hope that Spain beat Japan. A draw for Japan, who lost to Costa Rica earlier in the day, and a German win, will mean second place comes down to goal difference. Supersub: Spain’s Alvaro Morata scores the opening goal past Germany’s goalkeeper Manuel Neuer CREDIT: Petr David Josek/AP

This was a strange evening for Spain whose first-half domination failed to deliver a goal. It eventually prompted Luis Enrique to abandon his false-nine plan with Marco Asensio in that ambiguous role and send on Álvaro Morata instead. When Morata scored with a thrilling finish on 62 minutes it felt like all the pieces had fallen into place for Spain. Instead, they ceased to be as dominant as they had been.

“What was important to me was the mentality was there,” Flick would say later. “They [German players] showed they wanted to get possession and create goalscoring opportunities. I am more than satisfied with the result.”

For Germany it seems quite simple now – the team is between two epochs and a second-round place would be an improvement on the disastrous defence of their title four years ago at Russia 2018. After that they have another couple of years before their home tournament of Euro 2024 to build a team and an identity, with Musiala at the centre of it. Spain, on the other hand, have an identity – and it is much the same as that of the great Spain teams of the last 15 years. The question is whether they can make it work for them.

They can still pass the ball better than anyone else. But you do wonder where the matchwinners are in this team. Two years ago Spain had dispatched Germany 6-0 in the Nations League – the two sides' most recent meeting before this night. This time they always looked vulnerable, especially when Germany lost their inhibitions.

Enrique's Spain are set up like the great Pep Guardiola Barcelona sides that featured Lionel Messi as a false nine in the place of a conventional central striker. The passing began, the carousel spun and Spain tried to tempt Germany's defence out of position.

Sergio Busquets, at 34, winning his 141st cap, is the thread back to the great Guardiola side of that Barca era. He has Pedri and Gavi either side of him as the inheritors of the legacy. They even have a converted midfielder at centre-back, the great Manchester City general Rodri. Dani Olmo was their most effective attacking player and forced the best save out of Manuel Neuer in the first half. Both Luis Enrique and Hansi Flick were reasonably satisfied with a point CREDIT: Ercin Erturk/Getty Images

Spain attempted around twice the number of passes Germany did. Enrique's players broke through German lines much more than their opponents. They dominated much of the game but the threat in front of goal was not quite what it should have been.

That was until Morata, scored after the hour – a beautifully worked goal down the left that went from Rodri to Olmo to Raúl Albiol. The real spice was in the finish, with Morata running to the near post and the goal over his shoulder. With Niklas Süle behind him he used the pace of the ball and the angle to beat Neuer. A glorious touch and it should have been the beginning of the end for Germany. Antonio Rüdiger had seen a header disallowed for offside but most of it had been about their defending.

For some teams the pressure might have been too great, but Germany dealt with the anxiety well. Flick gambled on the substitutions, bringing off Gündoğan among others. Sané was excellent. The pressure increased on Spain whose goalkeeper Unai Simón had looked shaky at times and then suddenly the chances came. Füllkrug scored when Musiala turned on the ball from Sané, and the man from Werder Bremen took over with a sharp half-volley past Simón.

Strangely it felt about right for Germany. They had thrown everything at Spain and Füllkrug was just the right man at the right time – World Cups can be like that. He has waited his whole career, one presumes, for this chance. Match details