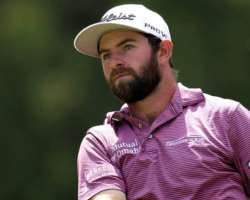 Cameron Young has been voted the 2022 PGA Tour Rookie of the Year after a season with five runner-up finishes.

The 25-year-old received 94 per cent of the membership vote, easily beating out Tom Kim and Sahith Theegala.

"Cameron's career has seen a remarkable rise over the last several years, and he quickly became a favourite among fans last season with the style in which he attacks the golf course," PGA Tour commissioner Jay Monahan said in a statement.

Young graduated from Wake Forest in 2019. He and 2021 winner Will Zalatoris are the first pair from the same college to win Rookie of the Year honours in back-to-back seasons.

The youngster ended his rookie season No 19 in the FedExCup standings and also made his Presidents Cup debut in September.