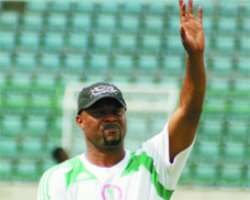 The Super Eagles' former left wing back who confirmed this in a telephone chat with Daily Sunsport disclosed he had since resumed in the Eagles's camp in Abuja where he and his former national team-mate, Austin Eguavoen, are currently sweating it out with the invited home-based players for the August 11 game.

'I wish to inform you that I have been drafted into the Super Eagles technical crew', the Heartland FC of Owerri former coach disclosed.

'As I speak with you, I am already in the team's camp in Abuja where Austin Eguavoen and I are currently coaching the invited home-based players for the international friendly match between Nigeria and South Korea on August 11, he disclosed.

Iroha further disclosed that the team would depart for South Korea on Sunday, August 7 where the invited foreign-based players are expected to join them for the final preparation before the international friendly.

Daily Sunsport, however, gathered that all the national team jobs are currently on temporary basis as the substantive coaches for the various national teams would be appointed after the elections into the new board of the Nigeria Football Federation (NFF).

There has been confusion in media reports over who succeeds Swede tactician, Lars Lagerback, as the Super Eagles' gaffer with Austin Eguavoen and Samson Siasia variously reported as having been contracted by the nation's football ruling body as the Eagles' new coach.