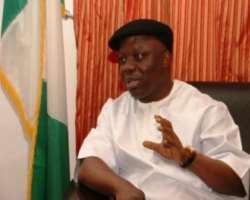 According to him, accusing fingers are pointing to opponents of Governor Emmanuel Uduaghan following his refusal to allow primary school teachers to embark on strike as the state NUT boss.

Akusu made the allegation at a stakeholders meeting on education in Asaba Thursday, saying he cannot be deterred from carrying out his assignment even as he expressed appreciation to the governor for the positive role he has played in the education sector.

Comrade Akusu who recalled the deplorable state of infrastructure in Primary Schools before the governor took over the mantle of leadership and praised him for the bail up fund which has consolidated the education sector.

He used the occasion to appeal to the state governor to intervene on the delay of promotion in the primary school sector explaining that promotion letters were not being promptly released.

Meanwhile Delta State Government has promised to spend about N1.2 billion to pay the promotion arrears owed Primary School teachers in 2006 and 2007 by Local Government Councils in the state.

The Governor, who disclosed this at the stakeholders meeting, said the state government took the decision to intervene on the payment because of his administrations interest in the welfare of teachers.

Dr. Uduaghan said the payment of the arrears would be spread over some months and appealed to the teachers to bear with the state government.

He explained that the payment of salaries, promotion arrears and leave grants was the responsibility of Local Governments but disclosed that the state was helping out to ensure good rapport between the state government and teachers in the state.

Dr. Uduaghan also promised to ensure that the promotion of teachers was not delayed, directed the state Primary Education Board Chairman to release pending promotion letters to the teachers.

"We are already doing a lot to assist local government councils in meeting their responsibilities in the education sector. We are assisting in promotion arrears and we are assisting in the payment of salaries".

Continuing the governor said, "To whom much is given much is expected. If you release allocation to local government Secretaries they in return will give to heads of Primary Schools and the primary School system will function smoothly".

Dr. Uduaghan appealed against any form of strike in the state explaining that workers should always explore the open door policy of the state government by using dialogue to resolve all contending issues.

He said his administration would always attend promptly to issues bordering on workers welfare and enjoined them not to allow political opponents use them against the state government.