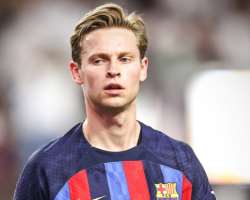 Gary Neville is not giving Barcelona any breathing space as he continues to wage war over the La Liga giants on the treatment of De jong.

He accused the Catalans of breaking a “moral rule” on paying players.

Neville had previously urged De Jong to seek legal advice due to his treatment by the Catalan giants. The Dutch midfielder has been encouraged to take a reduction in wages or leave the club this summer, with the player going on to like a post on Instagram slamming his treatment from Barca.

But the dutch player is not interested in none "De Jong should consider legal action v Barcelona and all players should be behind him!" Neville had tweeted. "A club spending fortunes on new players whilst not paying the ones they have under contract their full money is immoral and a breach. @FIFPRO should be all over bullying like this and stop it.”

His comments over Barca, explaining that - under German law - Twitter is required to provide notice to anyone whose tweets are reported by a user based in Germany. The screenshot confirms that Neville's tweet about De Jong was the subject of the complaint, and that it was neither in breach of Twitter's rules or of German law.

"I’ve been found innocent thankfully in a German Court of Law!" was Neville's response. "Those Barca fans are sensitive."

Neville continues by claiming that Barca’s stance over De Jong was “unpalatable” and claimed that they were “bullying” the player. The former United defender added: “They (Barcelona) have deferred his wages, he’s helped the club – well done to him, it was covid, every club was struggling. He’s obviously shown that he’s a team player.

“At the point whereby he goes into his big wages to get it paid it back, they basically want to try and sell him and probably are trying to push him out the door. But they’re saying to him that he won’t get those deferred wages while they’re taking a £55million or £75million fee, or whatever it is, from Manchester United. That’s just wrong!

“And then you go and spend money on Lewandowski at the same time. That’s why I’ve spoke up in the last few weeks. I love Barcelona as a football club, it’s unbelievable.”

Neville continued: “Barcelona might not have broken a rule yet, but morally they’ve broken the rule because they’ve suggested to the player that if he leaves, they won’t pay him that money. The wages that he’s been paid for the last year or two are championship wages.