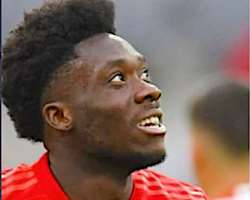 Bayern Munich defender star Alphonso Davies has announced he will donate his 2022 FIFA World Cup earnings with Canada to charity.

Davies whose roots can be traced to Ghana West Africa, 21, featured in 13 of 20 qualifying fixtures as Canada topped the CONCACAF section to reach the World Cup for the first time since 1986. They have been drawn in Group F alongside Belgium, Croatia and Morocco at this winter's finals, where the Bayern left-back is expected to be his country's key man.

"Canada welcomed me and my family & gave us the opportunity for a better life," Davies wrote on his Twitter channel on 2 August. "It enabled me to live my dreams. It’s a great honour to play for Canada and I want to give back, so I’ve decided that I will donate this year's World Cup earnings to charity."

Born in a refugee camp in Ghana, Davies and his family emigrated to Canada in 2005, eventually setting in Edmonton. He signed for the Vancouver Whitecaps as a teenager, before officially joining Bayern in January 2019, aged 18.

The Canadian often shares his experiences of his journey, and spoke at a FIFA Congress on behalf of North America's successful 'United bid' to host the 2026 FIFA World Cup. He has since become the first footballer to be a Global Goodwill Ambassador for the United Nations High Commissioner for Refugees, and is regularly involved in charitable initiatives, particularly in his hometown.

He is a four-time Bundesliga winner, and was also part of the Bayern team that won a historic 2020 sextuple, earning him a place in history as the first Canadian player to lift the UEFA Champions League