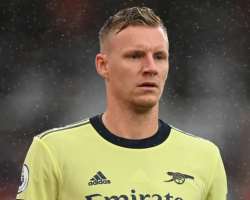 Newly promoted premier league side Fulham are in advanced talks with Arsenal over a transfer for out of favor keeper Bernd Leno.

Fulham will hope Silva can now avoid an immediate return to the second-tier, having fallen out of the Premier League in 2018/19 and 2020/21 after success in the Championship play-offs. The Cottagers finished in 19th and 18th respectively after edging the Wembley affair.

Craven Cottage chiefs have already backed Silva substantially to build a side they hope can avoid another relegation. Four players have so far arrived in west London this summer, as Fulham remain in talks with Arsenal over a deal to sign Leno among a clutch of late targets.

Reports has it that Arsenal and Fulham have agreed in principle to sign Leno for £8m. The German has entered into the final year of his contract at the Emirates Stadium, where he fell to second-choice behind Aaron Ramsdale last season.

Leno will undergo a medical with Fulham once the Craven Cottage outfit have finalised the structure of their payments. His move from north to west London will also see Silva edge a late rival challenge from Leicester City

All thingd being equal Leno could make his Fulham debut on the opening day of the new Premier League season against Liverpool once signed from Arsenal..