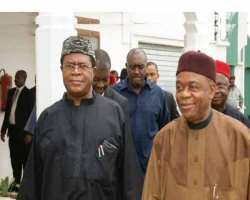 
ABUJA, JULY 23, (THEWILL) - Governor Theodore Orji of Abia State snubbed the Peoples Democratic Party (PDP) team that went to woo him to the party today as he bluntly refused to put pen on paper saying it is too early to jump ship having spent less than a month with the All Progressive Grand Alliance (APGA).

Sources at the meeting which was held at the government house in Umuahia disclosed that the PDP delegation which was led by the PDP National Chairman, Dr. Okwesilieze Nwodo were stunned when Orji tabled four demands that must be met before he dumps the APGA, which he joined from the Progressive People’s Alliance (PPA).

The conditions according to the sources in the closed door meeting includes; That the PDP executive in the state be forced to resign, that the Chairman and Secretary of the new exco must come from him; that all the governorship aspirants must step down for him and that the PDP must set up a high powered delegation that would go plead the leadership of APGA, particularly it’s Chairman, Board of Trustees.

Also the source disclosed that the governor who is battling for his political life against the backdrop of charges by his former party that he failed, complained during the meeting which was attending by the Minister of Labour and Productivity, Emeka Wogu, Senator Nkechi Nwogu, Hon. Chinenye Ike, former Minister of Foreign Affairs, Chief Ojo Maduekwe, Hon. Nkiruka Onyejiocha, Hon. Mao Ohuabunwa, Dr. Ihechukwu Madubuike, General Ike Nwachukwu, disgraced former National Chairman of the party, Prince Vincent Ogbulafor amongst others that there are certain political leaders in the state who ought to be present at the meeting for him to take the meeting serious.

Governor Orji, at that instance compounded the doubts when he asked that the meeting be shifted to another date to allow for further consultation.

"But before then, the PDP members at the meeting agreed that a ten man committee be raised by both sides of the table, to meet and harmonize positions before the next meeting date. Minister Wogu told the governor to hasten up and make up his mind as time was not on their side.

"There was also a drama as the state party chairman; Ndidi Okereke and Hon. Ohuabunwa were locked outside the meeting venue, until a certain intervention came to allow the duo in. At this point Ohuabunwa held Okereke’s hand and forced him to enter the meeting. This underscored the apathy and indignation of majority of the state PDP members on the development," said the source.

Prominent members of the state stakeholders conspicuously absent were Chief Onyema Ugochukwu, Senator Enyinnaya Abaribe, Damian Ozurumba, Tony Enwereuzo, among so many others.

Recall that Gov. Orji had in the wake of his altercation with his former party, the PPA jumped ship to APGA at an elaborate ceremony inside the Michael Okpara auditorium, Umuahia which had in attendance, Dim Chukwuemeka Odimegwu Ojukwu and the Governor of Anambra State, Peter Obi less than a month ago.