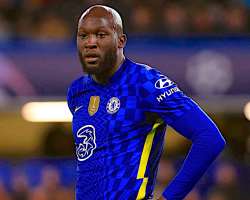 Inter Milan and Chelsea has agree to €8 loan fee

The Blues club-record signing for £100 million ($136m) will leave for just an €8m (£7m/$8m) loan fee with the potential to earn more through performance-related add-ons.

The 29-year-old hired a lawyer especially to force the transfer and will take a pay cut to ensure his return to San Siro.

Todd Boehly has prioritised the negotiations around Lukaku to kickstart Chelsea's summer.

The Blues were keen to get his club-high £325,000-a-week wages off their books after a breakdown in the relationship between the striker and manager Thomas Tuchel.

This is despite Chelsea effectively paying Lukaku to play for Inter with yearly installments on his transfer set at €23m (£20m/$24m).

The deal shows thatBoehly and the new Blues consortium are fully backing Tuchel despite the costs.

Chelsea will now look to add a new attacking signing with Manchester City's Raheem Sterling thought to be a frontrunner to come to west London.

The No. 9 failed to adapt to life under Tuchel, who places huge demands to press on his forwards.

Unfortunately, that wasn't Lukaku's strength, which saw Tuchel ultimately not use the Belgium international as much as he wanted.

The inability of either player or coach to adapt ultimately led to an unsanctioned interview by Lukaku, which served to alienate him from supporters.

That breakdown in the relationship was never repaired but Lukaku still ended the season as Chelsea's top scorer with 15 goals.

He scored a creditable 0.45 goals per 90 minutes but it wasn't enough to say he properly adapted to the style of play under Tuchel.